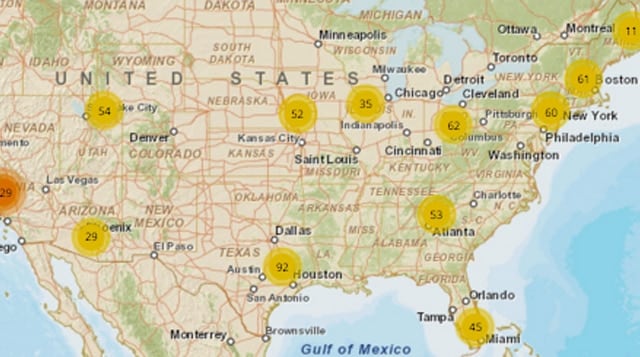 Areas with the most pistol manufacturers. (Photo: ATF)

Big news for researchers and data junkies. Per a 2013 memo on “Transparency and Open Government,” the Bureau of Alcohol Tobacco Firearms and Explosives in conjunction with the Justice Department revamped its website to make the information it’s tasked to collect more accessible to the public.

The ATF kicked off the Open Data Industry Showcase on Tuesday to introduce its website’s new functionality and to field questions and suggestions from the public.

“We hope this builds a partnership between the industry and the public and ourselves, so that you could question us, you could hold us accountable, and then you could also support us as we move through the mission of the agency,” said Francis Frande, ATF deputy chief information officer.

At the start of the three-day symposium, those in attendance included mostly pro- and anti-gun lobbyists, gun manufacturers and, of course, Guns.com, to watch creators of the project discuss basic user instruction.

The Open Data platform allows users to search datasets and review information, and then present findings in a visual narrative, meaning users can transform raw data into a spreadsheet, bar graph, line graph, map, etc. Afterward, the information can be downloaded or embedded in a website.

For example, a user can look at revenue brought in from the $200 tax on National Firearm Act items in 2012, or ATF budget spent on crime fighting vs support in 2014, or create a geospatial map showing dealers licensed to sell NFA items.

Also, the functionality available allows for the creation of what’s called an Application Program Interface — a seamless way for web developers to build applications that include continually updated datasets into the infrastructure of a website.

Information contained on the site will be updated as it’s pulled in, roughly every quarter or year, whatever federal law requires, and will go back as far as 1976 for some areas.