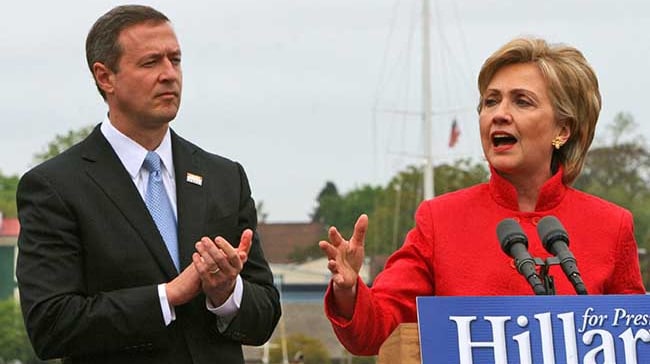 New York Sen. Hillary Rodham Clinton speaks about her campaign for the 2008 presidency after being endorsed by Maryland Gov. Martin O’Malley, left, at City Dock in Annapolis, Md., on Wednesday, May 9, 2007. (Photo: Associated Press)

Democratic presidential candidates Hillary Clinton and Martin O’Malley on Tuesday both upped the ante on their campaigns’ stand on gun control.

Clinton, the current front-runner for her party’s nomination, narrowly edging out Vermont Sen. Bernie Sanders in a recent poll, debuted a video this week espousing her stand for increased gun regulations.

“This epidemic of gun violence knows no boundaries,” says Clinton in the ad, which will run in Iowa and New Hampshire on the eve of important primary votes.

“Between 88 and 92 people a day are killed by guns. We’re better than this,” said the candidate, blending Centers for Disease Control and Prevention figures for all firearm related deaths including homicides, accidents and suicides.

The former secretary of state’s website details her stance on gun violence prevention in a nine-part plan of actions she would undertake as president. These include strengthening background checks by closing the so-called “Charleston Loophole,” requiring background checks on internet and gun store transfers, repealing the gun industry’s Protection of Lawful Commerce in Arms Act protections, and reinstating the federal assault weapons ban.

The third place hopeful in the race for the Democratic candidacy, former Maryland Gov. Martin O’Malley on Nov. 3 also amplified his message on being tough on guns.

“It’s about action, not words,” O’Malley said in the release of the platform of seven executive actions he planned on taking as president.

Echoing several of Clinton’s proposals, to include stripping away PLCAA protections for the gun industry, O’Malley would also direct the federal government to crack down on “cop-killer” ammunition such as those “defeated by the NRA earlier this year,” mandate the use of gun locks for firearms not in use and alert law enforcement to failed gun sale background checks.

Further, he would direct the federal government to only accept firearms contracts with companies that use microstamping technology on their guns.

The first Democratic Party presidential primary is set for Iowa on Feb. 1.