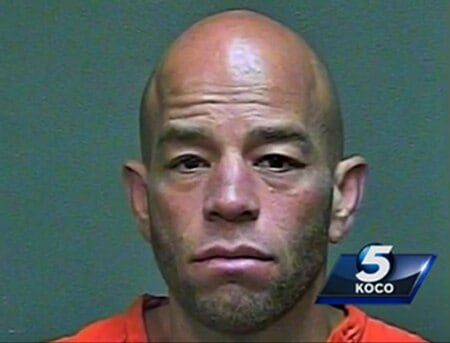 Brian Ryan is behind bars once again, thanks to the brave efforts of an armed citizen. (Photo: KOCO)

An Oklahoma City homeowner described his Friday night as “definitely wild” after finding a fugitive hiding out in a spare bedroom and making a citizen’s arrest.

Brian Ryan, 35, was wanted for robbery and authorities had been searching for him for almost a month when they spotted him at a Circle K in a stolen vehicle. As officers approached him, he fled from the area, and eventually abandoned the vehicle when he jumped from it, according to reports from local media.

Soon thereafter, Steven Dildine heard his dogs begin to bark, and when he went to see what the commotion was about, he noticed the flashing lights of police cars outside. Officers were searching the neighborhood for Ryan, and even looked over Dildine’s property, all to no avail.

Still, knowing a fugitive was on the loose, Dildine grabbed his handgun, however, he was unaware that Ryan had already entered his home through a bedroom window. The stranger in the home caused Dildine’s dogs to become overly energetic again, and when he went to the bedroom where the dogs were at, he noticed Ryan down on the floor on his hands and knees.

Dildine told Ryan he needed to just give it up. 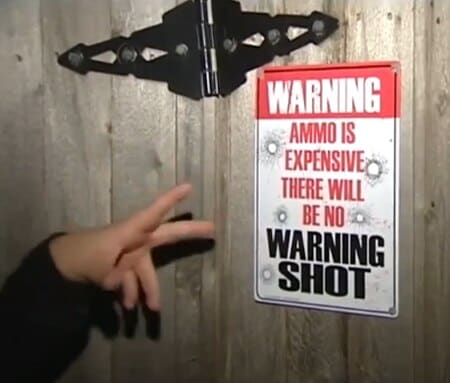 True to the sign he has displayed outside, Steven Dildine got his point across without a warning shot. (Photo: KOCO)

Eventually, as Ryan got closer, Dildine displayed his gun.

“I guess, he thought I was going to shoot, because he screamed,” Dildine said.

But Dildine never fired a shot because apparently the sight of his gun was enough to put Ryan into submission, and in fact, Ryan continually pleaded with Dildine not to shoot him. Dildine held Ryan at gunpoint and ordered him to go outside, where he was turned over to authorities.

Ryan is being held at the Oklahoma County Jail with a $24,000 bond, where he faces numerous charges, including first-degree burglary and grand larceny.