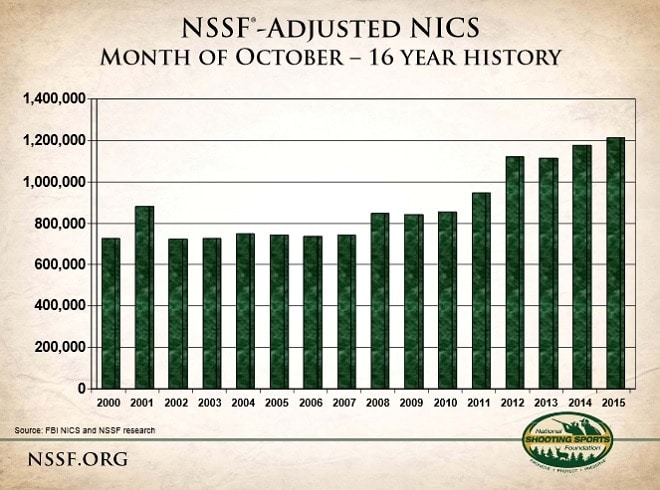 The adjusted National Instant Criminal Background Check System figures for October 2015 are 1,211,478 checks, the highest on record in the 17-year history of the program.

In the seemingly ever-increasing rise in gun sales under the Obama Administration, the statistics released by the Federal Bureau of Investigation put the number of checks performed in October at 1,976,759.

The final figure is an increase of 3.1 percent compared to the October 2014 NSSF-adjusted NICS figure of 1,174,797. Should the trend continue, it’s very likely that 2015 could break the current overall record of checks seen in 2013.

When asked for a potential driver behind the steady increase, industry experts were candid.

“The numbers are just out, so we have not yet had the opportunity to gather viewpoints from across our industry to provide color commentary for what continues to be year-over-year healthy firearms sales,” Michael Bazinet, NSSF director of public affairs told Guns.com. “We think more individuals making the decision to exercise their right to keep and bear arms along with the rising interest in target shooting provide the underlying long-term narrative.”

Bazinet conceded that the recent bevy of gun control talk in the media is another likely reason for the uptick in sales.

“This trend is probably getting an additional boost from media coverage of political office holders and candidates talking about their plans to seek additional restrictions on gun ownership. Law-abiding citizen apparently hear those words and then vote with their wallets,” said Bazinet.