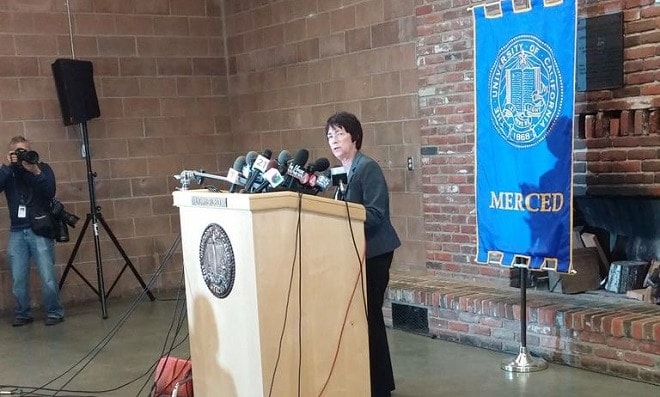 University of California Merced Chancellor Dorothy Leland said, “Today’s events have shaken all of us” following a stabbing on campus. (Photo: UC Merced via Twitter)

Police killed a knife-wielding assailant after a 20-minute rampage at the University of California’s Merced campus Wednesday.

The suspect, identified by Merced County Sheriff Vern Warnke as Faisal Mohammad, an 18-year old freshman living on campus, began attacking individuals with a large hunting knife in a classroom of the school’s Classroom and Office Building around 8 a.m., prompting an alert from the school to avoid the area while campus police were called.

Mohammad, an engineering student from Santa Clara, was killed by police after a pursuit through campus in which others were stabbed.

University Chancellor Dorothy Leland in a press conference Wednesday afternoon said those injured included a student adviser, two students and a contractor. Two of those injured were airlifted to hospitals in Modesto for treatment while others were treated on scene and released.

“This is not a message any chancellor wants to deliver. But sadly, today’s events have shaken all of us. Incidents like this may happen at other places, but not at UC Merced,” said Leland in a statement. “As shocking and troubling as today’s act of violence is, I am thankful the incident was quickly brought under control by campus police under the leadership of Assistant Police Chief Chou Her and that the injuries to the victims do not appear to be life-threatening.”

Gun control groups, to include Moms Demand Action, Everytown and the Brady Campaign celebrated Brown’s action as a solid win in the fight against gun violence despite the fact that advocates for the measure could not cite a single instance of a lawful permit holder being involved in a school shooting in the state.

“Thank you Governor Jerry Brown for your commitment to protecting human lives instead of gun manufacturers’ profits,” wrote Moms Demand Action at the time.

Classes at UC Merced are canceled Thursday and the school is offering counseling services.

This article was updated from the original as the suspect was identified.