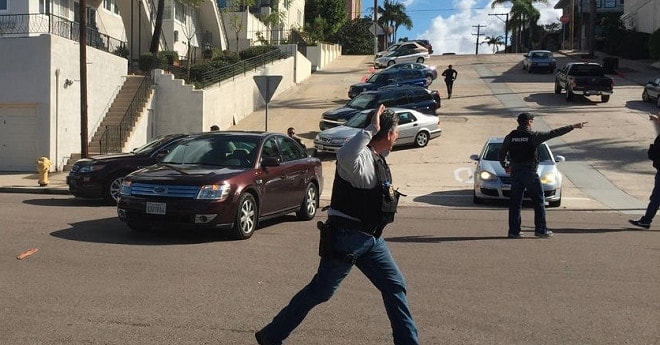 Police shut down a neighborhood and an airport Wednesday as part of a standoff with an armed felon in the Banker’s Hill area of San Diego. (Photo: Greg Bledsoe/AP)

A known felon and gang member became involved in a five-hour standoff with San Diego police in his ex-girlfriend’s apartment Wednesday that closed a nearby airport.

Police were called to the Banker’s Hill area of the city, approximately 1.6 miles away from San Diego’s Lindbergh Field, around 9:10 a.m. in response to a call from a woman who advised her estranged boyfriend had called her from inside her apartment.

When they arrived on scene, they found an armed suspect, later identified as Titus Nathan Colbert Jr., 33, alone and barricaded in the unit. After Colbert fired through a door in the fifth floor apartment, police backed off and established a cordon around the area, shutting down traffic and advising locals to shelter in place.

“They were able to use a K-9 to try and clear the apartment. At some point when they were inside the apartment, rounds began to come out of a door, an interior door, nearly hitting the officers,” said SDPD Lt. Scott Wahl.

Tom Neu, who lives next to the apartment where Colbert was, told reporters he hid in his bathtub talking to friends and co-workers during the siege before being rescued by authorities.

As a precaution, the Federal Aviation Administration issued an air traffic alert closing Lindbergh to arrivals as planes coming into the airport overfly the scene of the standoff.

Surrounded by four sniper teams, SDPD SWAT members fired gas rounds through a window into the rear of the condo and deployed a robot to observe Colbert’s actions during the course of the event.

In the end, Colbert threw his firearm out of the window of the apartment and surrendered to authorities around 2:30 p.m. There were no casualties in the course of the incident despite initial reports there were “couple of bodies” on the scene.

According to court documents obtained by the local NBC affiliate, Colbert is a known gang member with an extensive criminal record that included five felony drug charges in 2012 alone as well as a string of other charges dating back to his teens. His brother, Tecumseh Colbert, is a convicted murderer currently on death row for two killings in 2004.

Officials with the FAA advised in all about 30 flights were canceled and another 30 diverted to other airports.