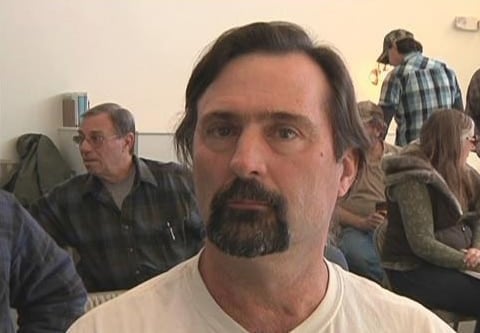 Sentencing for William Krisstofer Wolf is scheduled for March 3, 2016.

William Krisstofer Wolf, 53, was arrested on the charges after buying a full-auto machine gun from an undercover federal agent earlier this year.

At his arraignment in April, Wolf said he did not recognize the federal court’s jurisdiction and refused to enter a plea on the charges against him. A magistrate judge entered a not-guilty plea on his behalf, the Associated Press reported.

During the trial, Wolf testified that he was seeking a legal version of the gun he bought and intended to use it for home-defense, but details from the investigation prove otherwise, the AP reported.

According to court documents, Wolf was well-known to local authorities as an anti-government organizer. He launched a weekly radio program in November 2013 known as “The Montana Republic” with the intent of educating the public and rallying “like-minded patriots” together to stand up against against corrupt and abusive government entities.

During the radio programs, Wolf would detail plans of action for the “restoration of the constitutional government” and taking back the government by starting at a local level and expanding outward. Those details apparently included discussions about destroying bridges and power grids, and gaining control of law enforcement vehicles and weapons. Wolf talked about using blow torches on officers outfitted in body armor, and destroying the Bozeman Police Department’s BearCat by “cooking it from the inside.”

During an October broadcast, Wolf said, “I firmly believe that all agents of the government, all judiciary, and all police officers are target.” The following month, Wolf told his listeners that the time for talking was over.

Around January 2015, Wolf was actively searching for the “most devastating weapons he could use” that included machine guns and flamethrowers. Also around that time he began a correspondence with a confidential informant who turned him on to an undercover federal agent.

In the months that follow, Wolf met with the undercover agent and discussed different weapons that he could acquire. During those meetings, Wolf expressed the same views about government with the agent as he had previously discussed on the radio broadcast.

The agent ensured Wolf that if he was to buy the full-auto shotgun through him, there would be no paperwork involved and nobody would know that he had it, to which Wolf allegedly replied, “I love that.”

In March, Wolf met with an undercover agent at a truck stop to buy a Saiga-12, which had been converted from a semi-automatic to fully-automatic and also had a shortened barrel. He told the agent that “the purpose of the gun is not to go hunting with, it’s to clean house.” Wolf paid $725 for the shotgun and was promptly arrested by federal authorities following the transaction.