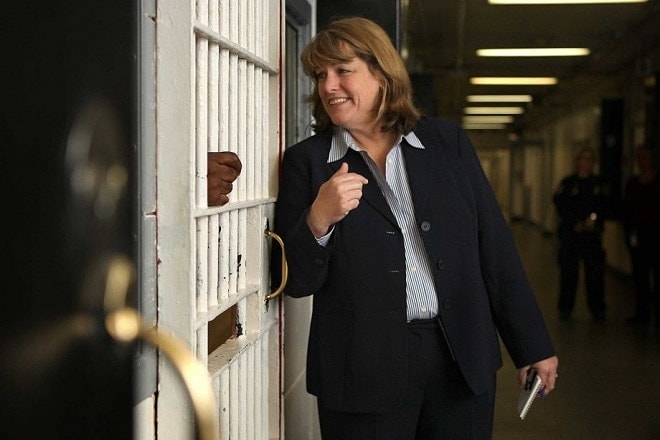 Vicki Hennessy is returning to the San Francisco Sheriff’s Department as its first female sheriff, but will she grant any CCW permits? (Photo: Liz Hafalia /San Francisco Chronicle)

With the landslide defeat of controversial San Francisco County Sheriff Ross Mirkarimi, it remains to be seen if his replacement opens the door to granting more concealed carry permits.

Mirkarimi was mired in a number of scandals since assuming office, including garnering national attention for enforcing Sanctuary City policy that helped release Mexican illegal immigrant Francisco Sanchez from county jail despite a federal detainer order seeking his hold for deportation. Sanchez was later charged in the murder of Kate Steinle on the city’s iconic Pier 14.

For gun owners in the county, some of whom notoriously sought out concealed carry permits through Mirkarimi’s office, the end of his troubled term is a small light at the end of the tunnel.

San Francisco county, which has a population of over 850,000, only has two active concealed carry permits, both granted prior to Mirkarimi’s administration.

In 2012, Mirkarimi was charged with a number of misdemeanors, including domestic violence and child endangerment for which he accepted a plea agreement that centered on him not losing his firearms rights, which would have made him ineligible for his sheriff position. Although suspended by the mayor for official misconduct due to the incident – during which Hennessy served as acting sheriff – he was eventually reinstated.

This brush with almost losing his own gun rights, however, did not stop him from refusing to issue concealed carry permits to those seeking them. In a 2014 interview, in which the sheriff boasted of not granting a single permit since taking office, he was clear on his position.

“I am not of the belief that more guns equals more safety,” Mirkarimi said at the time. “When you think about the fact that more Americans have lost their lives to firearms than in all the wars in the last 50 years involving the United States, I think that helps set a foundation for us to at least apply a little discretion about how concealed-carry weapons permits are issued.”

While Hennessy has not formally made a statement on granting more concealed carry permits, her 1,800 word official platform has no mention of either guns rights or gun control. Emails sent to Hennessy’s campaign from Guns.com seeking clarification on the matter have gone unanswered.

Second Amendment advocates believe there is an opportunity for the new sheriff in town to reverse the agency’s course. After all, even granting one permit under a “may-issue” licensing scheme would be an improvement over Mirkarimi’s effective “no-issue” practices.

“The Calguns Foundation will be reaching out to Sheriff-elect Vicki Hennessy to formally request that she respect Second Amendment civil rights as much as any other fundamental right she likes,” Calguns President Brandon Combs told Guns.com Thursday.

“Her first order of business should be to scrap Ross Mirkarimi’s outrageously hypocritical and unconstitutional carry license policies and allow law-abiding residents of San Francisco to responsibly exercise their right of self-defense in her increasingly-dangerous city and county,” Combs said.

Making a change towards increased gun rights for the new sheriff could mean swimming against the current of her political allies.

The incoming Hennessy has the support of several strongly anti-gun figures in the state to include U.S. Sen. Dianne Feinstein, Supervisor Mark Farrell and California Attorney General Kamala Harris. Having served as San Francisco’s Director of Emergency Management during the mayorship of now-Lt. Governor Gavin Newsom, who is backing the motherlode of gun control voter initiatives, Hennessy picked up his endorsement as well.

While she advised she would be making changes to how the agency interacts with immigration officials, handling detainer requests on a case-by-case basis, other changes may take time.

“When you walk in you can’t just get a broom out and start sweeping, you have to take your time and assess everything carefully and make sure that you’re doing the right thing,” Hennessy told local media after securing her new job this week.

She assumes office in January.