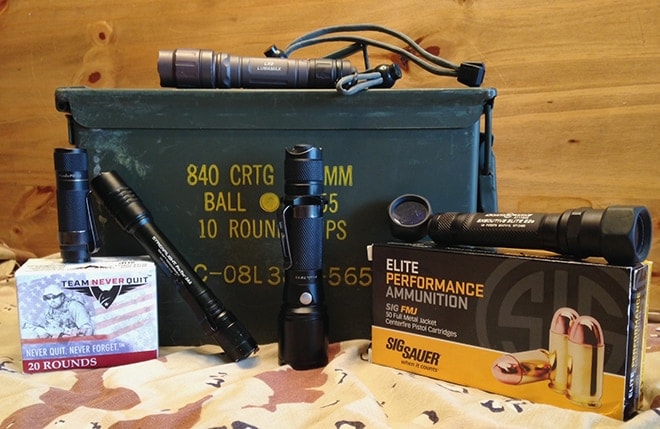 A flashlight can be useful, even necessary, for a number of purposes along with your firearm in dim-light conditions.  The primary perspective here is civilian home and self-defense, though most of these concepts apply to the property owner or ranch hand needing to exercise (legal of course) animal control. Consider for a moment the commonly quoted (dare I use that term “common sense”) statistic that at least half of criminal encounters happen in dim light.  You’ve probably put some thought and practice into your firearms.  Selection and use of a torch deserves attention too. 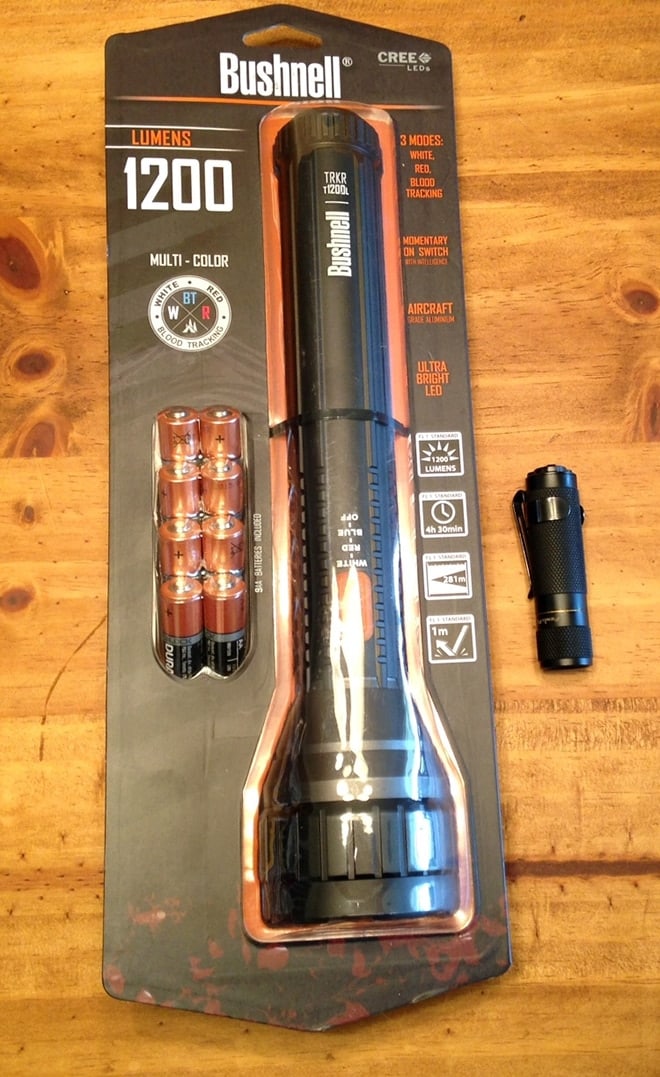 Size of quality tactical lights ranges from more than a foot to less than 4-inches. (Photo: Team HB)

This article isn’t a review or recommendation of any particular light, and none of the brands mentioned here provided samples.  This piece also doesn’t even begin to address dim-light shooting techniques.  It’s an orientation to the primary options available so that your investment in lighting works for you.  Many gun owners who’d think it foolish to go to the sporting goods store and buy the first gun they see, without testing it or considering its utility for them, do just that with auxiliary lighting.

A working assumption here is that muzzle and finger control are being duly exercised at all times. An overarching principle of flashlight use is to use light as little as possible, and as much as necessary to do the job.  Specifically, the job may include the following:

1.  Navigation should be obvious.  Whacking a shin against the coffee table in the dark hurts; it’s even more hazardous if you’re attempting to move in the armed and ready position.  A light can provide for navigating one’s way through an escape from or engagement in a criminal encounter. Thing is, you have to have it available when the encounter starts.  How available is your flashlight in the areas where you spend the nighttime hours? If it’s not immediately accessible, figure out how to make it so.

2.  Threat or target identification is the other critical function. As anyone who’s completed a hunter safety class knows, it’s a bad idea to shoot at noise or motion without having confirmed what it is. There are tragic examples of a parent or grandparent shooting and killing or injuring beloved youngsters who were sneaking back into the home at night.  After a shot is fired, a light may be necessary for tracking injured game or the status of a criminal assailant. 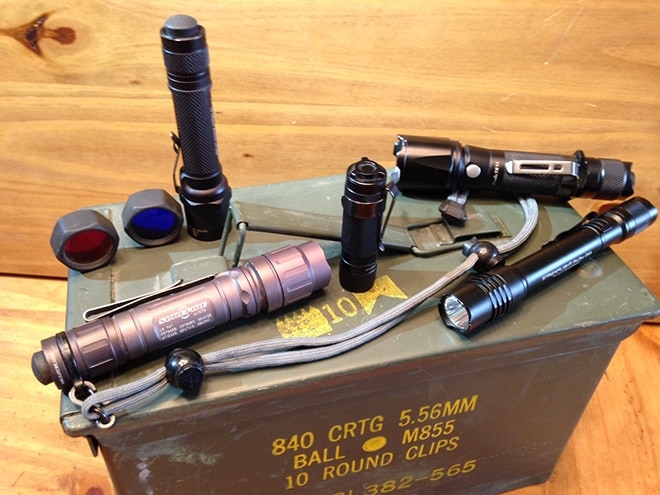 Protruding tailswitches accommodate some shooting techniques while solid ends limit accidentally being turned on in a pocket. (Photo: Team HB)

3.  Signaling your presence is generally thought of as something to be avoided in a nighttime defensive encounter. Signaling can work in your favor if you and your work partner or family member have a system of sorts.  This is especially applicable if the location is rural and/or there are multiple structures in which “friendlies” may be located. Signaling systems should be kept simple and make minimal use of light.

4.  Shooting is the follow-up to threat identification, assuming, in a defensive encounter, the attacker is a real threat to you or other innocent folks, and your decision to use deadly force is reasonable.  For the hunter, it’s the follow-up to identifying the object of interest as the desired (legal, of course) quarry. Shooting with a flashlight is a skill set unto its own, and beyond the scope of this article.

5.  Disorienting a potential attacker with light is a useful tool to buy time to escape, if possible, or to counter the attack.

Selecting a light or two

Not long ago, two general options were available for flashlights: massive, heavy Maglite-brand lights, the use of which was mostly relegated to law enforcement, and cheap plastic numbers with woefully dim output.  Technology and industry have advanced since then, to set us in a world where flashlight choices are nearly unlimited, with prices to make lighting up the night accessible to virtually everyone.

How bright is right? 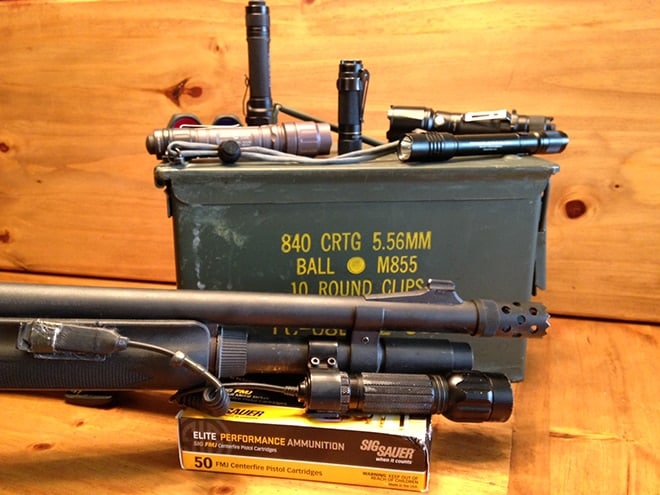 In addition to ammo, a collection of flashlights for specific scenarios completes a gun collection. (Photo: Team HB)

Plastic dollar-store handheld lights are eliminated from this discussion, mostly because they lack sufficient brightness to effectively identify a threat—or non-threat, for that matter. One trait to look for in a flashlight sufficient for use with a gun is the lumen rating.  What’s a lumen? As far as I can tell, it’s what use to be called one candlepower.  The packaging (if any) of an insufficient light won’t advertise this measure of brightness and will likely be too dim to be very useful for anything but navigation of a small room or immediate area. Of course, it’s better than nothing.  Minimum lumen rating for effective use is in the mid-70s.  On the other end of the spectrum, 4000-lumen models cast a far-reaching beam that can light up more than a square quarter mile of landscape.

More isn’t necessarily better when it comes to lumens.  The primary factor to consider is your anticipated shooting environment.  If your home has white walls and many mirrors, even a moderately bright light can be blinding to you when used indiscriminately. If your anticipated environment is outdoors, brighter is likely to be better, but again depends on not only the physical environment but also anticipated range. Sophisticated tactical lights make distance shooting possible, but may wash out the immediate environment in a way that obliterates important details.

The shooter’s own light sensitivity should influence their choice of lumen rating.  People with good night vision generally require a less-bright light.  Likewise, some lights cast a somewhat yellowish tint, whereas others virtually whitewash the area with a light we perceive as clear.  Some people find details easier to pick out in tinted light; others prefer “white” lighting. 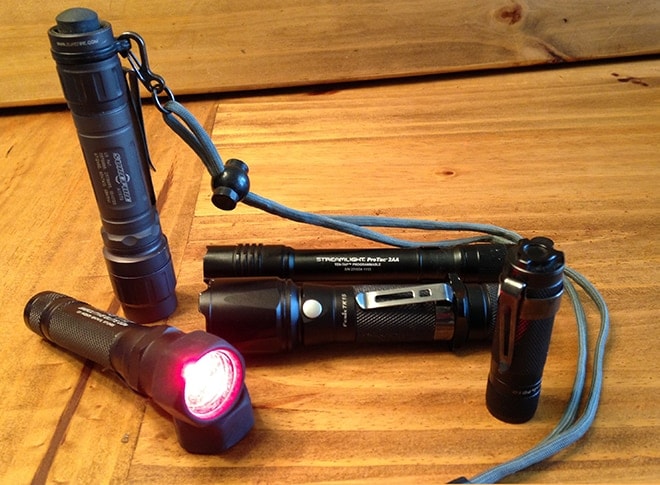 Speaking of light color, included in, or with, many flashlights are filter to adjust brightness as well as color.  With practice, such features can make a single light useful within multiple environments or purposes. Without practice, multiple features can cause a circus of confusion and fiddling around. Some lights have filters that change the visible color of the beam.  Red is conducive to map-reading, and blue is useful for tracking, for example.

In addition to color filters, a strobe feature is common in tactical lights.  Keep in mind that shining a bright light in a person’s eyes is, in itself, likely to stall their activity for a second or two, buying you valuable time.  A strobing light can enhance this benefit, especially with an intoxicated assailant.  The time-purchase benefit assumes you’ve trained with strobing or other features and are prepared to take advantage of their effects on the people and things around you. As with your gun, know the tool and be able to apply it as needed in total darkness, expediently. Bells and whistles are nice if you can make good use of them. Otherwise, the KISS principle applies.

Handling the light at night is nearly as important as handling your gun.  Dim-light shooting techniques are beyond the scope of this article, however, it’s helpful to have practiced with some techniques to know your preferences for a few traits such as: 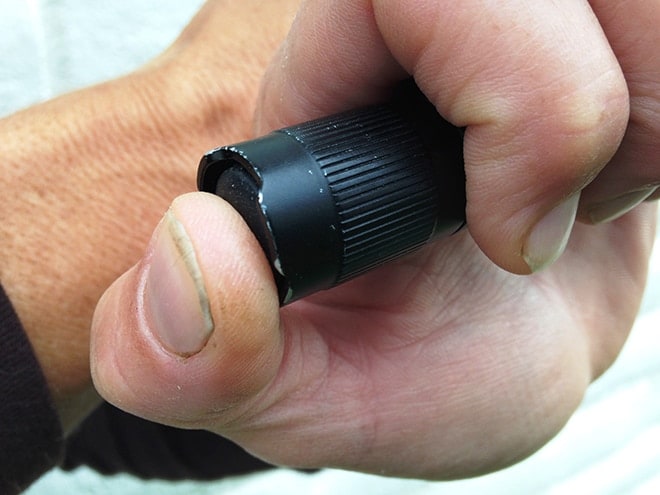 A tailswitch is easy to find and operate. (Photo: Team HB)

1.  Location of switch.  Most tactical lights have a tail switch—the ON button occupies the butt end of the light.  The great advantage of this is that simply indexing the light in hand orients the switch in an operable position.  Dollar store lights, and some tactical lights, have a switch located on the body of the light.  If the light’s perfectly cylindrical, time will be spent fiddling to locate the switch. Some have a side-mounted switch but with a flattened surface to facilitate indexing of the switch.  These are made to use the light with the so-called Chapman technique. Practice some light-holding and shooting techniques to determine which ones you use most confidently, and seek a light with a switch conducive to your favored techniques.

2.  A pressure-operated switch is standard equipment on a good tactical light, and generally not present in lower-quality lights. Having a switch that will allow the operator to turn the light with thumb pressure, without the commitment of “clicking” it fully on, allows for intuitive operation and makes it easier to apply the principle of using the light as little as necessary.

3.  Size and shape of the light is a critical consideration for your confidence in using it.  An associate prefers a short, fat Fenix PD10 for everyday carry.  I find the same light easy to lose during a reload, and difficult to grasp when using some two-handed shooting techniques.  One of my favorites is the Streamlight ProTac 2AA, a long, skinny, dog-bone shaped number. Its pen clip attachment keeps it indexed in a predictable location in a cargo pocket or bag, making it easy to deploy quickly.  Others might be annoyed by the fact that the exposed part of the light can audibly knock against surfaces in close quarters. To each their own. 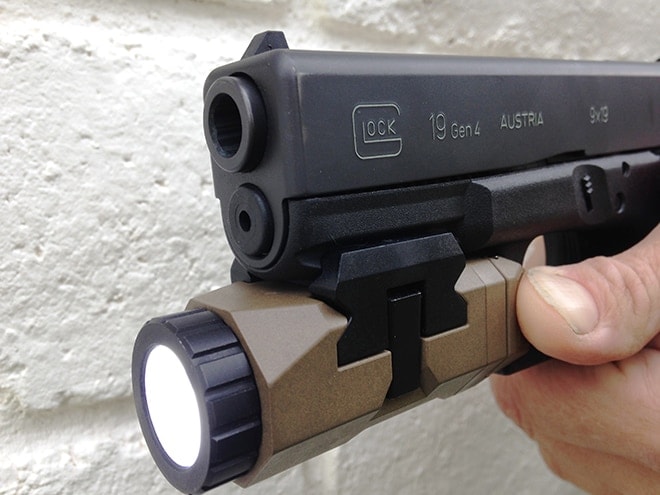 Weapon mounted lights are useful for bedside or vehicle guns but not a substitute for a handheld torch. (Photo: Team HB)

Weapon-mounted lights are pricey with reputable brands starting at around $120.  Their convenience is undeniable… just one thing to pick up and aim.  Extreme discretion is advised, though.  Understand that muzzle and beam are aiming in tandem fashion, and that can have legal consequences if you’re simply investigating a strange noise that turns out to be, say, your neighbor returning a borrowed item to the driveway.  Using a weapon-mounted light without careful attention to the rules of firearm safety can result in tragic and permanent consequences.

At the bedside or in a vehicle are ideal applications for a weapon-mounted light, but this light tool is NOT recommended to the exclusion of a hand-held light.  Incidentally, though many weapon lights are made with quick-mount/quick release levers, don’t expect that you’ll be able to safely conduct that process in a defensive encounter.  Weapon-mounted lights on handguns present the need for a holster that will accommodate the light/gun package, another consideration before making a purchase.

A handheld light makes a handy striking implement in the event you need more, or different, weaponry. Many tactical lights feature bezel-shaped ends to enhance the sting of a strike. If a confrontation has come down to fists, a light in hand beats nothing at all. 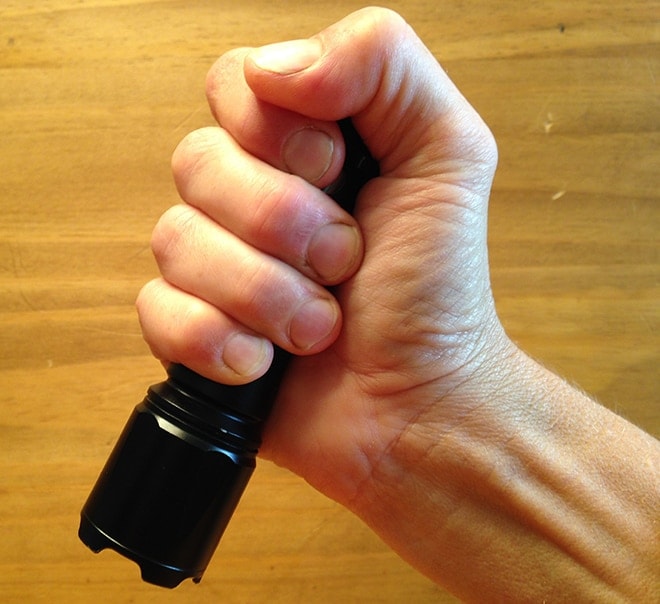 A Bezel end makes for a decent striking tool, should it come down to fists. (Photo: Team HB)

Powering your tactical light is likely to be accomplished through conventional batteries of at least AA size, one or more CR-123A “photo” batteries, or rechargeable batteries.  Historically, rechargeable batteries are generally to be avoided; their strength and charge faded after a couple of recharges. Surely there are some models on the market now that perform better, but none that I’ve heard anyone recommend.  CR-123 A batteries provide substantial power for bright lights, but aren’t for the person who only uses the light once every six months, or lacks organizational habits like keeping extra batteries on hand in the vicinity of the light.  Though powerful, CR-123As don’t give the user much, if any, warning that they’re about to go dead.

But seriously, what brand?

The brands mentioned here are reputable, produce lights to suit a variety of budgets, and have been range- and life-tested by our team.  They’re not the only brands, just the ones we can say we’ve tested.  They are: Streamlight, InForce, Fenix, and SureFire.

If you own a gun for self-defense, responsible dim-light shooting and gun handling are a logical and ethical addition to your skill set. Training and safe practice with the light-handling techniques of your preference enhance your readiness to take care of personal and family safety.  Having a good light at your disposal can help you avoid unnecessary suffering as a result of not having light when it was needed, whether to shoot or avoid shooting in favor of some other action.