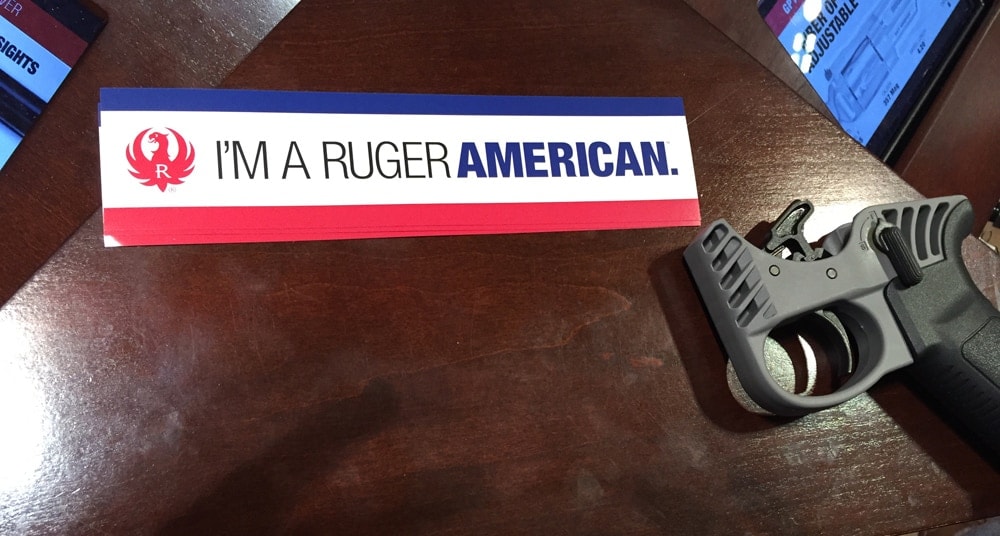 Ruger showing off a new sticker at the 2015 NRA annual convention in Nashville. (Photo: Daniel Terrill)

As the national background check system performed a record number of checks over the past four months, Sturm, Ruger and Company saw an increase in sales and profits.

Profit for the company’s third quarter totaled 11.9 million, up $5.1 from 2014, and $45 million total for nine months into 2015, according to filings with the Securities and Exchange Commission. New guns produced in the past two years represented $81.1 million, or 21 percent, of firearm sales in the first nine months of 2015.

Fifer credited the company’s established network of independent distributors along with pushing summer promotions. He said in the past Ruger only offered programs during the January and February trade show season.

“We have traditionally only done (promotions) during the January and February period and shipped those guns typically through May, for the very first time we’ve now offered it in July and August where (retailers) could place orders that would ship over the next several months,” Fifer said.

Offering the promotions during the summer instead of exclusively at trade shows gives independent wholesalers more incentives to distribute Ruger products, he added.

“It gives them another swing at the plate and it gives us a reason for those independent dealers to spend … money on Ruger instead of spending it all at the buying group shows,” he said.

Each month during the quarter, July through October, NICS performed a record setting number of checks, roughly 7.1 million, for the system’s 17-year history. While the checks don’t always translate to sales, they do act as a barometer for completed transactions.

Another barometer for Ruger is the 2 Million Gun Challenge, a campaign to sell 2 million firearms between the National Rifle Association’s annual convention and in turn donate $2 per gun to the gun lobby. Two quarters in, the company reported selling 836,700 guns.

Comparitively, Smith & Wesson met its projected earnings for its fourth quarter. Total sales for the fourth quarter set a record at $181 million, an increase of 6.2 percent. Of that, firearm sales accounted for $166.4 million.

In the future, Ruger plans to increase efforts into accessories and licensed products, such as new Ruger brand ammunition and knives.