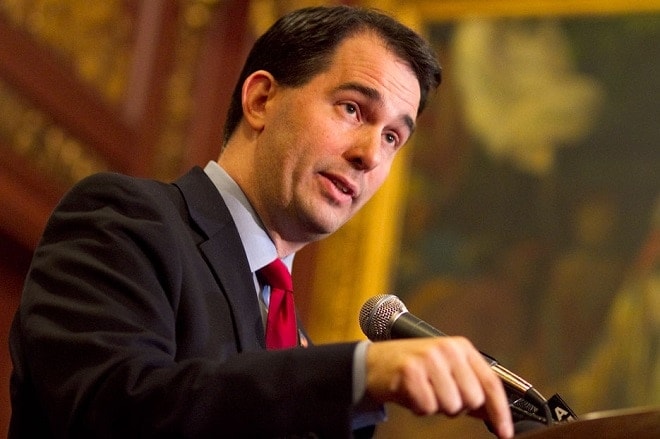 A proposal headed to Gov. Walker now will mean felons with guns would pick up three years in prison for their efforts. (Photo: AP)

The Assembly bill, which establishes a three-year minimum sentence, was introduced in May by the unlikely duo of Reps. LaTonya Johnson, a Democrat from urban Milwaukee, and Joel Kleefisch, a Republican from rural Oconomowoc. Finding fast support by GOP lawmakers and buy-in from some Dems, the measure was approved on a voice vote in the Assembly in June and by a 23-9 roll call Friday in the Senate, clearing its path to signature by the governor.

“I strongly support the rights of lawful citizens to carry firearms; however the recent wave of gun violence reinforces the need to sentence and keep violent felons in prison so the revolving door of justice does not send them right back onto the streets with the opportunity to reoffend.” Kleefisch said in a statement in April. “While we have no illusions about this having a massive deterrent effect, when caught the consequences listed under the bill will literally keep violent criminals behind bars longer and keep our communities safer.”

The proposal, AB 220, would establish that felons found with a gun would have to be sentenced to a minimum of three years in prison. Those using a weapon in a violent crime would garner at least eight years.

Current Wisconsin state law, while authorizing a maximum $25,000 fine or a up to 10 years in prison for a felon who has lost their firearms rights to be found in possession of one, has no minimum sentencing guidelines, meaning judges can authorize little or no jail time for those found guilty.

This aspect earned the opposition of some lawmakers in the legislature, who felt it was the wrong approach to keeping neighborhoods safe if not coupled with social programs. As such, the bill was almost derailed in close committee votes including a narrow 3-2 approval from the Senate Committee on Judiciary and Public Safety, and an earlier 6-3 vote in the Assembly Committee on Corrections, in each instance strongly opposed by urban Democrats.

“Doing mandatory minimums to change violence without jobs (and) services and without partnering with the federal government … is insanity,” said Sen. Lena Taylor, D-Milwaukee, this week.

However, Milwaukee Mayor Tom Barrett, also a Democrat, argued the proposal, if signed into law, would help keep violent criminals off the street, claiming that 10 of 26 felons recently arrested in his city would have still been in jail under the measure’s guidelines.

The bill now heads to Gov. Walker, a strong pro-gun Republican and recent presidential candidate who is expected to sign the measure.