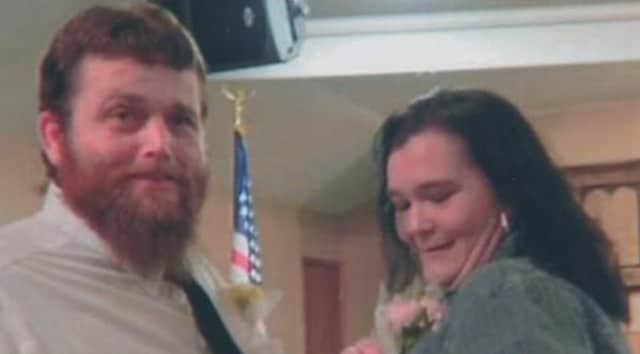 Angie Harville’s family believes her life could have been saved had authorities placed her husband in custody earlier that morning. (Photo: WSMV)

The family of a Tennessee woman who was killed by her estranged husband in an apparent murder-suicide last month is questioning why police didn’t do more to save the woman’s life after she called 911 at least two times.

Authorities released the 911 recordings this week and claim they did all they could and it was the woman who refused to adhere to their suggestions to keep her safe.

Angie Harville placed a 911 call just after 3 a.m. on Oct. 25 when her husband, Danny, showed up trying to kick in the door to her Monterey home, local media reported. Danny, who Angie kicked out of the house in September, was suicidal and was just released from a mental hospital. Angie begged the dispatcher to send over officers to make her husband leave, also informing the dispatcher of her husband’s mental state.

Officers later found Danny at a nearby convenience store and while they retrieved Angie’s cell phone, he was not taken into custody or charged with any crime.

Several hours later, at 6:44 a.m., Danny returned to the home and Angie placed another call to 911. The dispatcher asked if Angie filed a domestic violence report, but she said the officers would not let her because her husband lives at the house. Angie then pleaded again with the dispatcher to once again send out officers, said Danny put holes in all of the walls, and that he was going to kill her.

Officers once again went to the home, but according to the responding officers, Angie refused to leave the home, despite their efforts to convince her she should.

“She stated she was afraid that Mr. Harville would burn down the house,” Officer Jennifer White wrote in a police report. “I explained to her that those were just material things, but her life and her children lives were more important.”

The third and final 911 call coming from the home that morning was placed by the couple’s 17-year-old son, who had locked himself and his 6-year-old brother in a bedroom.

“My parents have been fighting for a few days and I just heard a gunshot upstairs,” the teen told the dispatcher.

Authorities later found Angie was shot and killed before Danny turned the gun on himself.

The Tennessee Coalition to End Domestic Violence called the incident tragic and indicated that it could have been prevented by authorities had they acted appropriately and taken Danny into custody after the first 911 call.

“Our assault law clearly said someone can place you in fear,” explained Kathy Walsh with the coalition. “So someone threatens they will kill you, someone breaks your door down, cuts the brakes on your car and so placing someone in fear is an assault and that’s enough for police to make an arrest.”

However, Monterey Police Chief Bill Randolph, who is willing to turn over the police video captured that morning, indicated his officer acted appropriately and said Angie was unwilling to help herself.