Atlanta police refusing to sell impounded guns, but not their own 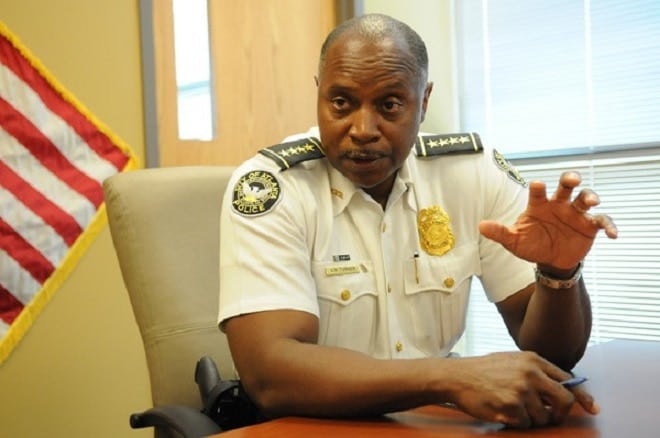 Even while Atlanta brokered a deal to trade in the police sidearms for new guns, the city is sitting on as many as 10,000 confiscated guns in violation of state law.

A 2012 bill, S.B. 350, prevented the destruction of any seized firearm not held as evidence in a criminal investigation and worked its way through the legislature before being signed into law by Gov. Nathan Deal. Under its guidelines, guns would be auctioned to the highest bidder and transferred to a licensed firearms dealer. However, the Atlanta Police Department, instead of selling the guns as directed by state law, is storing them.

How many? A report this week from CBS46 said more than 10,000 guns were currently in limbo while a follow up piece by the Atlanta Journal Constitution puts the figure closer to 6,000.

Regardless of the number, they aren’t going anywhere soon.

“We are now in the process of storing all the weapons that have cleared out judiciary process,” Police Chief George Turner told local media this week, saying it’s “really catastrophic” to put the guns up for bid every six months as required by state law.

City officials advised they have not sold a single confiscated gun at auction since S.B. 350’s passage.

However, state gun rights advocates told Guns.com that Atlanta has a double standard when it comes to managing their stocks of firearms.

“The City of Atlanta Police Department traded 2,300 used Smith and Wesson M&P service weapons for 2,300 new Glock 22’s in 2013,” Georgia Carry President Jerry Henry told Guns.com Monday. “Guess what happened to the used S&W’s. You got it, the dealers who bought them from the city sold them to law-abiding citizens. It appears to be OK for the city of Atlanta to put their own firearms ‘back on the streets’ but not other firearms.”

Indeed, Atlanta Police-marked M&Ps started to show up for sale on the used handgun market in 2013 at bargain prices.

The 2012 law has also been a sticking point with gun buyback organizers in the state who run their events in conjunction with law enforcement. In Richmond County, one organizer, Niki Watson, said she felt a “slap in the face” when police auctioned off the guns turned in by the group over a two-year period. Watson sent guns bought afterward to Atlanta for disposition.

“You just adjust to the situation and carry on with your objective,” Watson said.

Georgia Carry is weighing options for a lawsuit against the city of Atlanta over the its non-compliance with the mandate.

“The city will be hearing from us soon,” Henry said.