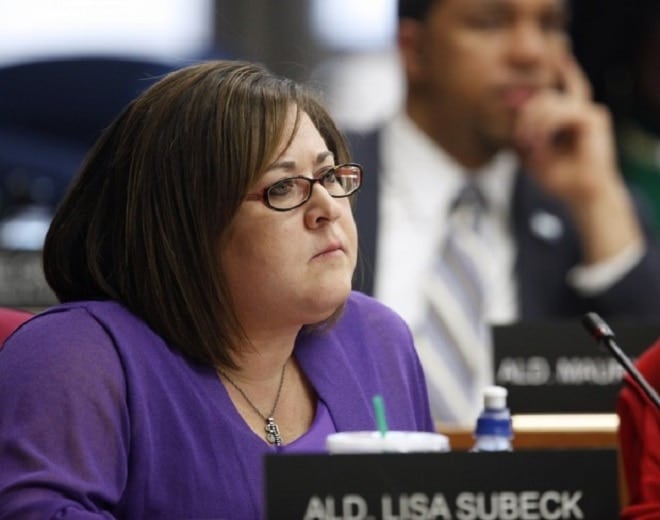 Madison Democrat Rep. Lisa Subeck feels no one in Wisconsin should own or use a semiautomatic assault weapon, definition to follow. (Photo: Michelle Stocker/Madison.com)

A bill introduced by four Assembly Democrats would establish prohibitions on a variety of rifles, shotguns and pistols with no provision to grandfather.

Debuted last week, backers of the measure contend it is needed to prevent mass shootings such as those at Sandy Hook Elementary School in Newtown, Connecticut.

Subeck’s legislation would set a broad definition of just what would be considered an assault weapon under Wisconsin law.

For semi-auto rifles with a detachable magazine, having the addition of a pistol grip; adjustable, folding or thumbhole stock; bayonet mount, threaded barrel, muzzle brake or compensator would deem them an assault rifle.

Other states, such as New York and California have similar rules, but allow for two or more of the cosmetic features before a rifle is considered an assault weapon – whereas Subeck’s rule would be triggered for just one.

For semi-auto pistols with a detachable magazine, having a barrel shroud, weight of 50 ounces or more, threaded barrel, stock or second handgrip, would classify it as an assault weapon.

The weight requirement alone would make most AR and AK pistols illegal under the law regardless of any other features. Further, the ban on threaded barrels would make most legal handgun caliber suppressors in the state non-functional.

For semi-auto shotguns, possessing a fixed magazine capable of holding more than 7 shells, a detachable magazine, forward grip or an adjustable or thumbhole stock would rule it an assault weapon.

This would make even legacy shotguns such as the Remington 1100 illegal if coupled with a common extended magazine tube.

No allowance for rimfire caliber firearms or for grandfathering guns already in possession is mentioned in the bill’s text, which would ban possession, sale, transport or transfer of any gun regulated under the proposed law.

Exceptions are in place for military and law enforcement as well as some approved dealers and for demilled weapons.

Violations of the law would incur a Class H felony, which, under Wisconsin law, carries up to six years in prison and fines reaching $10,000.

Wisconsin has relatively low rates of homicides tied to firearms. When contrasted to Maryland – which has a similar population and chalked up 268 gun homicides in 2013 – Wisconsin suffered 103. Of those, just six were attributed to rifles.

The legislation has the backing of Representatives Terese Berceau, Melissa Sargent and Chris Taylor, however, with Republicans in charge of both chambers of the legislature and the governor’s mansion, it is unlikely to pass.