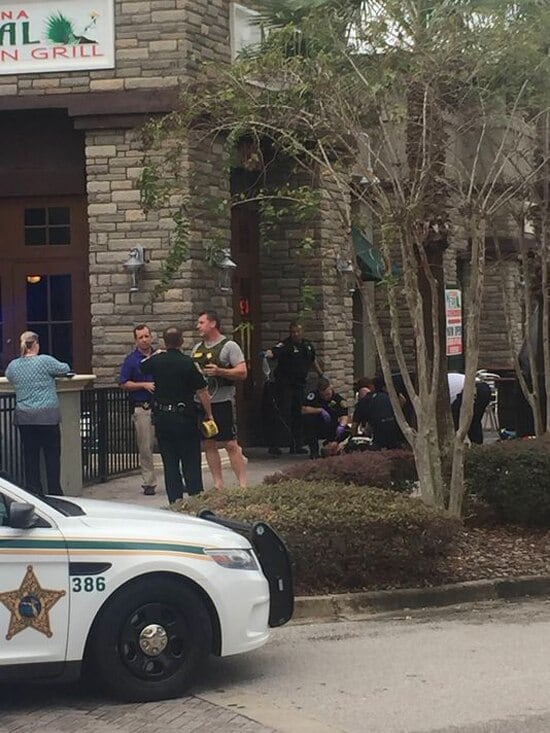 An armed bank robbery in Julington Creek, Florida, Monday afternoon ended with the suspect being shot twice after he was met by a former sheriff’s deputy while making his escape.

The suspect, who was later identified as 25-year-old David Duong, walked into the Compass Bank carrying a semi-automatic pistol and handed a note demanding money to one of the tellers, local media reported. The teller turned over an undisclosed amount of money and Duong went to leave the building.

But unbeknown to Duong, a bank customer, Michael Kellam, who is also a retired Jacksonville sheriff’s deputy, heard the commotion as he sat at the drive-thru window, and took action.

Kellam, who was also armed, chased Duong as he attempted to flee from the scene, but the chase eventually ended in a standoff between the two men. According to Kellam, as well as some witness accounts, when Duong reached for his gun, Kellam fired at him, striking the suspect twice – once in the face and once in the arm. Duong continued to run through a shopping center before he finally collapsed in front of a Mexican restaurant. By this time, deputies were already called to the scene, but no additional shots were fired.

Duong was airlifted to a local hospital, where he remained in serious condition while authorities worked to obtain a warrant for his arrest.

At this time, no charges have been filed against Kellam, who apparently has a history of citizens’ complaints for improper actions, unbecoming conduct and biased-based policing while working as an officer. Although the final determination will fall on state prosecutors, repercussions are possible due to the fact that Kellam pursued Duong while in a non-law enforcement position, local attorney Shannon Schott said.

“I think really what is going to make a difference is the eye witness testimony,” Schott added. “From what I read so far, there were witnesses that saw what happened and saying that the robbery suspect had his hand on a gun or was reaching for a gun.”