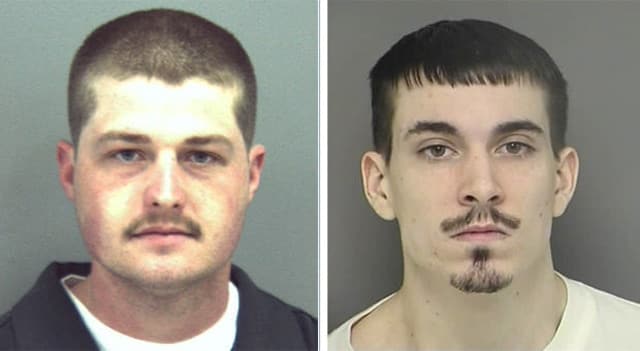 Two men believed to be members of a white supremacist group were formally charged Monday in the U.S. District Court in Richmond, Virginia, following an undercover operation by the Federal Bureau of Investigation that exposed plans which involved shooting and bombing churches and a host of other violent crimes aimed at inciting a race war.

The arrests and subsequent charges came Sunday after Doyle and Chaney – following several meetings and discussions on the purchase of automatic weapons, explosives and silencers – attempted to purchase guns and explosives off of undercover FBI agents posing as dealers in illegal firearms.

“I walked to the end of the cul-de-sac, and saw 15 police cars, marked and unmarked, and K-9’s searching,” a woman who lives near Doyle, but did not wish to be identified, told local media. “There were people wearing camo and carrying big weapons.”

According to the affidavit, “Doyle and Chaney and others known and unknown to the FBI, ascribe to a white supremacy extremist version of the Asatru faith.” In September, Doyle met with other members of the group, including Chaney, at his home to discuss plans to either shoot those attending black churches and Jewish synagogues or bomb the facilities as a means of “acting out in furtherance of their extremist beliefs.”

The group also discussed other acts of violence against those of the Jewish faith and the intent to harm a gun store owner in Virginia and kill an Oklahoma gun store owner. Other plans included robbing and killing a local jewelry dealer and robbing an armored truck. As discussed, the proceeds from their crime spree would go to buy land, weapons and training for the anticipated “race war.” At some point during the investigation, Doyle met with Halderman to discuss more in-depth details of carrying out some of those plans, but on Sunday morning they fell apart.

Rodney Clarke, chairman of the trustees of a Baptist church near Doyle’s house, said the plot hit close to home because the group’s meeting place was just right around the corner. But Clarke also explained that before they even learned of the group’s plans, which authorities did not say included Clarke’s church, they had already begun “securing the sanctuary.”

“It’s a shame you can’t worship your God in peace,” Clarke said. “You try to have your focus on Him, but you have to worry about what’s coming through the door.”