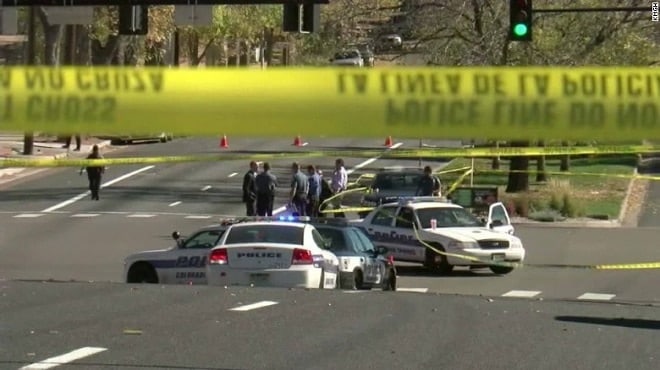 Some open carry opponents assert the practice delayed police response to an incident that ended in the shooting of three in Colorado Springs on Halloween. (Photo: WTVR)

Following a shooting in Colorado Springs that ended in three deaths, some argue police response was delayed over open carry laws and are now pushing for a ban.

On Oct. 31, Noah Harpham, 33, was seen by a neighbor, Naomi Bettis, walking down the street with a rifle and a handgun. Bettis called 911 and described what she saw to police and, as she told the Washington Post, was “brushed off” by a dispatcher who advised her of Colorado’s open carry laws. While authorities said “a call for service was built for officers to respond,” Lt. Catherine Buckley of the Colorado Springs PD told left-leaning Mother Jones that a it “[W]asn’t the highest priority call for service.”

Bettis called police back a second time, after Harpham opened fire on a bicyclist in front of her home, to which officers were immediately dispatched.

The Denver Post reports that Harpham was under police control, shot dead in an exchange of gunfire with authorities, at 9:01 a.m., about seven minutes after they were dispatched.

Now, Colorado Springs City Councilman Bill Murray is calling for the city to end the practice of open carry, citing it may have delayed police response.

“Open-carry is a privilege, it is not a right,” Murray said at a council meeting this week, seeking to take steps to restrict it. “Why would a person openly carry a weapon down the street, except to intimidate?”

Local gun control advocates were on hand at the meeting to bemoan the practice as well.

“The (dispatcher) explained (to the 911 caller) that Colorado law allows public handling and display of firearms,” Brooke Squires, with Moms Demand Action said. “Within ten minutes of the initial 911 call, the gunman had killed three people. Law enforcement agencies around the state admit that open-carry causes confusion and uncertainty for 911 dispatchers who receive reports of weapons being openly carried.”

However, a legislative fix in the city may be in violation of Colorado’s preemption laws, which mandate local government cannot pass or enforce a law stricter than the state’s. The city has been burned before when attempting to do just that.

In 2012, Colorado Springs police arrested James Sorensen in Acacia Park for openly carrying a .40-caliber handgun on his hip. Officers at the time cited a local policy against guns in city parks as reason for his arrest, but it later turned out that policy had been preempted by a state law in 2003.

The city settled a lawsuit with Sorensen for nearly $24,000 the next year.

Those seeking to implement a ban in Colorado Springs point to Denver’s prohibition as a model, though the nature of how the state’s capital city kept its ban in place is a saga of its own.

The city and county of Denver, which had a ban on open carry that predated the state’s preemption laws, sued the state in 2003 citing the laws as being in conflict of local home rule. This resulted in a ruling upheld on appeal that found, while the state’s firearms laws are standard, some localities may prohibit the open carrying of firearms in a building or specific area.

In short, Denver District Court Judge Joseph Meyer contended that Denver’s high crime rate and population made it different from the rest of the state. A subsequent 2006 challenge to that ruling by the Aurora Gun Club in Sternberg v. Denver made it to the state supreme court but was deadlocked in a split decision among the justices.

Colorado Springs Mayor John Suthers advises he has no plans to seek to restrict residents’ ability to openly carry firearms.

“What your open carry laws are don’t dictate what your violent crime rate is,” Suthers said.

This article has been updated from the original to clarify Denver’s open carry restrictions.