For nearly two centuries, the United States has had a love affair with lever-action rifles.

From Tom Mix and John Wayne to Tommie Lee Jones and Robert Duvall, the lever-gun is a staple of American culture and an iconic tool of brush hunters across the country.

One of the most widely spread but often forgotten of these designs is the Savage 99.

Arthur Savage, most interesting man in the world?

Arthur William Savage was one of those strange Renaissance men of the Steam Age. Born in Jamaica to Welsh parents, he grew up around the world and lived a very active life to say the least. Never satisfied, Savage invented a torpedo, explored the Australian Outback (where he was held captive by aborigines), and was a railroad engineer for a time as well as a rancher before designing firearms. You get the idea that while he may have not have always drank beer, when he did he preferred Dos Equis.

In 1889, Savage, then working for the Utica Railway company, patented a rifle with a hammerless lever-action design, which featured a downward-tilting breechblock and rotary-spool magazine. This was a big departure from the lever actions of the day made by Winchester and other makers.

Until his design, lever action rifles were tube-fed either from a tube under the barrel or in the butt stock.  Because in a tube design the cartridges rest bullet point to primer against each other, only rounded point rounds were used to avoid accidental ignition. Savage’s rotating five-round spool magazine meant that now pointed cartridges with spitzer bullets could be fed through lever actions. The magazine used a spring-loaded spool with grooves to hold the cartridges and took advantage of the mechanism to include a counter indicating the number of shots left.  The hammerless firing pin design also eliminated a hammer that could snag while at the same time provided a faster lock-up.

His first prototype rifles were available in 1892. 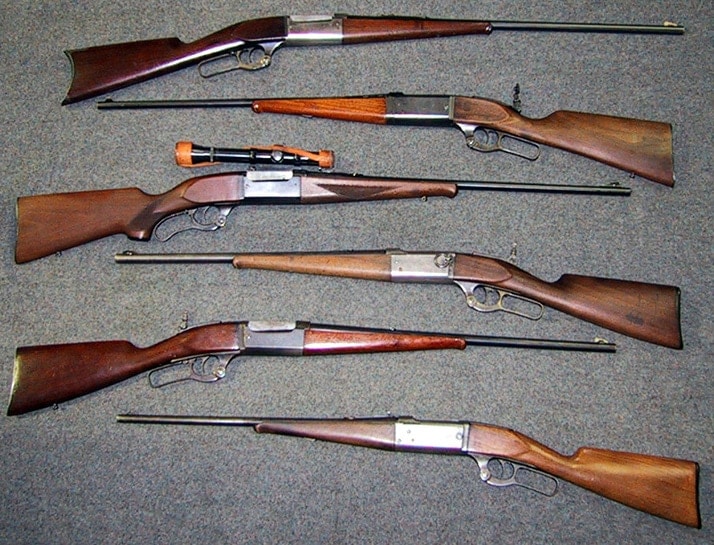 Savage submitted his design to the US Army in 1892 for testing, hoping for adoption by the military. While today we would snicker at a lever-action gun on a modern battlefield, for nearly a half century they were the most modern weapon available.

During the US Civil War, Spencer and Henry carbines produced shock and awe in battle after battle. Winchester was a huge supplier of lever action rifles to the armies of Europe and Asia during the last half of the 19th century. As late as 1917 the Russian Army was still ordering new Winchester 1895s chambered in 7.62x54R for the Tsar’s Cossacks.

While many liked Arthur’s lever action, the Krag-Jorgensen designed bolt-action rifle edged it out in the Army’s trials. The Krag was a slightly modified design similar to the ones adopted by the Royal Danish Army. The Savage was lighter and could be fired rapidly but could not be topped off while still ready to fire,  fired awkwardly from a prone position, and was seen as overly complicated when compared to the Krag.

Not to be let down, Savage improved his design and in 1895, he submitted a modified version of his rifle, made by Marlin, to the New York National Guard for testing. While he won the contract, it was later overturned as a result of unrelated political tensions and his design remained unaccepted.  As a result, the NY National guard were equipped with single-shot Trapdoor Springfield rifles during the Spanish-American War. 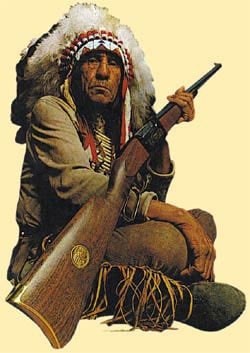 Chief Lame Bear has been a part of Savage’s company logo since 1919.

Savage formed his own company in 1894, turned to the commercial market, and redesigned his military rifle as a sporter. With the addition of another innovation, a cocking indicator on the top of the tang that would let the user know even in the dark if the weapon was ready to fire, the Savage 99 was born.

Savage, always eager to adapt his rifle to the marketplace, offered the 99 in multiple calibers. Over its nearly century long sales history it was offered in no less than 18 calibers ranging from the popular .300 Savage, .30-30 and .243 Winchester to such little known rounds as .38-55 Winchester and .32-40 Ballard. There was even an option for it to fire .410 shotgun shells. These diverse chamberings and the typical 40-inch, 7-pound size of the rifle made the Savage 99 a handy brush gun with hunters from everything from coyotes and deer to moose.

In 1919, during an exchange for a good deal on a lot of model 99’s for Native American Chief Lame Bear and his tribe, the Southern Cheyenne, Savage added the Chief’s image to the company’s logo. Today the good chief’s likeness is still displayed by the modern company.

Additionally, the Montreal Home Guard contracted 2,5000 Model 99 rifles in “musket” form during World War I, which incorporated a bayonet lug and military-style stock. Because altering the rifles design to accept the Canadian standard .303 British cartridge would have delayed delivery, these rifles were chambered in .303 Savage.

The rifle was only discontinued in 1997 after 98-years in near continuous production. 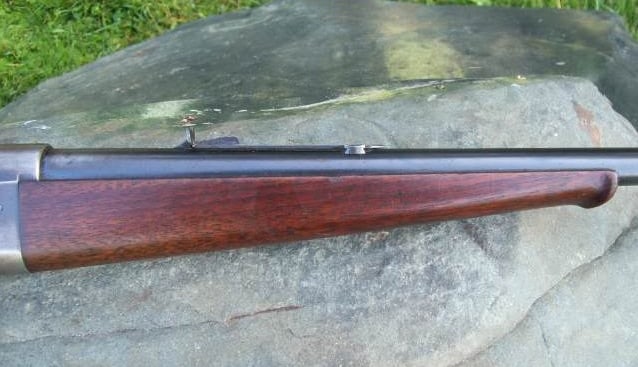 In the century the Savage 99 saw production, more than a million examples in a myriad of configurations came off the line. One of the most common are versions in the hard hitting and versatile .300 Savage caliber, a round that was later used to develop the 7.62x51mm NATO. Late production models made since the 1950s often go for $300-$400 while browsing current online auction sites.

Early models in exotic calibers tend to pique the interest of well-informed collectors with deep pockets and often go over $1000. This is compounded by those classics manufactured with a straight grip stock and elegant European style Schnabel fore end. The Schnabel (meaning “beak” in German) enables a better grip on a short-stocked longarm in wet weather.

Also, be aware that Montreal guardsmen bought their own rifles and as such, had the option to have their name stamped on the stock.  Stamps on these guns, known officially as the Model 99D Musket, usually appear on the left side of the receiver.

Simply put, if reliable lever actions are something you have a need for, the old ’99 is hard to beat for shooting or collecting.

This article originally ran on Guns.com as “The Savage 99 Rifle: The People’s lever?” on August 23, 2012 and has been edited for content.