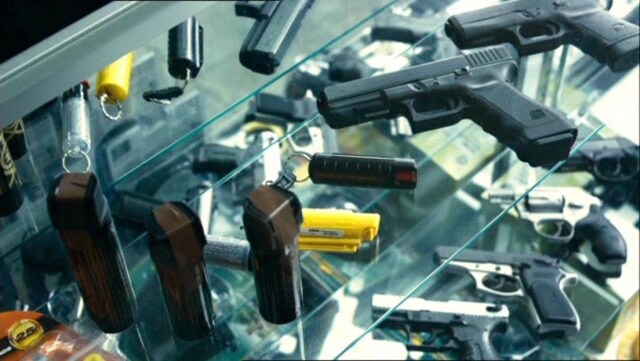 Glock pistols and other guns in a display case in some stupid Nic Cage movie.

A third person responsible for an elaborate kickback scheme between Glock sales representatives and a Kansas gun store was sentenced Tuesday.

James Craig Dutton, 44, of Acworth, Georgia, was sentenced to 18 months in federal prison for conspiring to take bribes and kickbacks to defraud Glock, the Justice Department announced.

According to court documents, Dutton accepted payments from a Kansas gun dealer for preferential treatment. Investigators said Dutton, his wife, another Glock rep and his wife, and the dealer were all involved in the conspiracy.

Ralph admitted he paid 140 bribes and kickbacks to the Glock employees totaling approximately $900,000. In return, OMB received special treatment over other gun distributors in the Kansas area and was then given more business in the form of government contracts and sales. Also, OMB received confidential information on the Glock company.