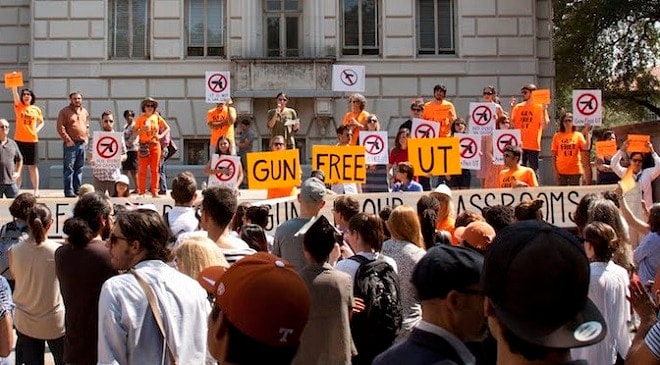 Faculty at the University of Texas have lawyered up and are exploring the possibility of a suit to keep legal guns off campus despite state law authorizing them.

After a series of compromises, a measure to allow licensed concealed handgun permit holders to carry their guns on public college campuses passed the state legislature earlier this year and was signed by Gov. Greg Abbott (R) into law.

As the law allows university presidents to carve out some areas that will remain gun free zones, UT President Gregory Fenves earlier this year announced a 19-member working group to recommend both safe firearms storage guidelines and map out enduring gun free zones for the campus.

Open forums for the group to receive feedback have been swamped with those opposed to the concept while at least one part-time professor resigned from his post in protest.

Now, some 800 staff in the expansive UT system have added their names to a public document vowing not to teach with guns in their classes while some have joined with students and parents to form Gun-Free UT, which advocates all buildings on campus be designated as gun-free zones and ultimately to repeal the new campus carry law altogether.

The group held a rally Tuesday and Max Snodderly, a neuroscience professor, advised the Houston Chronicle that if Fenves and the school’s regents do not follow their recommendations, the path is open for the group to sue, claiming an infringement of their rights.

“We will evaluate our legal options,” said Snodderly. “We are not going anywhere.”

The group has retained the help of the National Lawyers Guild and is speaking with legal teams from gun control organizations.

“We are also consulting with attorneys with the Campaign to Keep Guns off Campus who have expertise in fighting back against campus carry in other jurisdictions,” said Gun-Free UT leader, Ellen Spiro, a professor in the Department of Radio, TV and Film.

Moms Demand Action has been on the ground as well, both at UT and the University of Houston-Dallas in a supporting role.

“Texas Moms have been part of a coalition working to provide input to college presidents about where guns should be prohibited on campus,” Stephanie Lundy with the Moms organization told Guns.com via email. “We’re working with students, educators, law enforcement, and plenty of other Texans to let college presidents know we don’t want guns in classrooms, dorms, or faculty offices.”

On a campus where a statue of Confederate President Jefferson Davis was recently removed, some members of the coalition broached the topic of guns and race.

Protesting faculty of UTs Department of African and African Diaspora studies wrote of their opposition to campus carry by saying, “The State and the University have a responsibility to protect and defend those who are most vulnerable. Therefore, we demand that firearms be banned in all spaces occupied by Black people on our campus.”

Professors are also making their voice heard as part of university governance both at UT and other schools.

Meanwhile, 150 students, professors and alumni calling themselves Gun Free UH penned an open letter to University of Houston President and Chancellor Renu Khator seeking to limit the repeal of gun free zones on that campus as well.

Gun rights advocates in the state are not impressed by the movement.

“Let the liberal, anti-gun elitists lawyer up and waste their money in a frivolous quest to push back against something that is legal in more than half of the United States,” Open Carry Texas President CJ Grisham told Guns.com Wednesday.  “All their screams and protests won’t change the fact that disarming the good guys doesn’t make the bad guys any less lethal. The University of Texas should see these fool hearted attempts by supposedly well-educated employees as proof that perhaps our state’s professors aren’t intelligent enough to be teaching the next generation of Texans.”