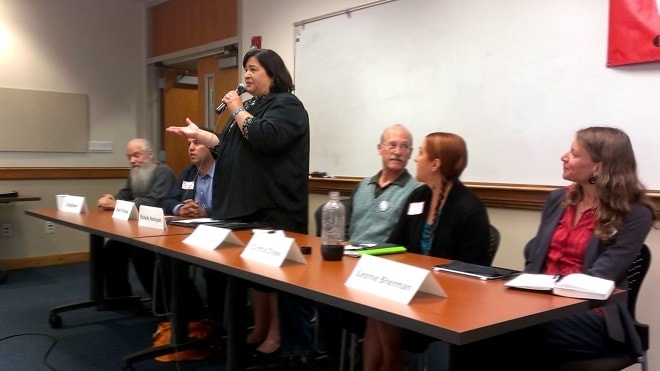 Councilwoman Richelle Noroyan wants gun owners in Santa Cruz to keep their firearms locked up under threat of a year in county jail. (Photo: Facebook)

The Santa Cruz City Council will hear a proposal in coming weeks that would require gun owners to report lost or stolen firearms and keep guns not in use locked up.

The measures are backed by Councilwoman Richelle Noroyan, who told the Santa Cruz Sentinel she had the proposals gathering dust until she saw an opportunity to introduce them following recent mass shootings.

“After I saw Obama give his comments about the community college shooting in Oregon, and saying the words ‘this is becoming routine,’ and ‘prayers are not enough,’ it just hit me kind of in an emotional way to want to do something to address this,” Noroyan said.

Noroyan’s proposals would bring two new gun control ordinances to the coastal town of 60,000 outside of San Francisco. First would be a proposal making it a crime to have an unsecured firearm in a home, mandating it either be on a gun owner’s person, locked away or disabled with a trigger lock.

Next would be a requirement to report any missing firearms within five days. Both ordinances would carry a penalty of up to $1,000 fine and a year in county jail.

Although council members have not weighed in on the proposals yet, Santa Cruz Mayor Don Lane is a member of Mayors Against Illegal Guns, which has backed similar efforts.

Noroyan told local media her bills are based on controversial laws adopted in San Francisco in 2007 which have seen almost a decade of legal challenges from gun rights groups.

Last year, a three-judge panel of the U.S. Ninth Circuit Court of Appeals upheld a lower court’s ruling that San Francisco’s storage requirements were constitutional. The panel stated that, while the law, “burdened the Second Amendment because storage regulations were not part of a long historical tradition,” they were “not a substantial burden on the Second Amendment right itself because it did not prevent an individual from possessing a firearm in the home.”

This led to an appeal to the Supreme Court which, although backed by numerous Second Amendment advocacy groups and 26 state attorneys general, was declined.

The apparent legal approval going all the way to the nation’s high court has emboldened other cities in California to reach for mandatory gun lock laws. Last month the Los Angeles City Council voted unanimously to mandate all handguns not in use be locked in a secure container under threat of a $1,000 fine.

“These laws are called ‘after the fact’ laws; You don’t end up enforcing them until after a tragedy has happened,” said Noroyan. “But the goal hopefully is if people do have trigger locks or lock them up when it’s not on their immediate person, that it will prevent gun violence.”

The Santa Cruz ordinances are set to be added to the Nov. 24 city council agenda.