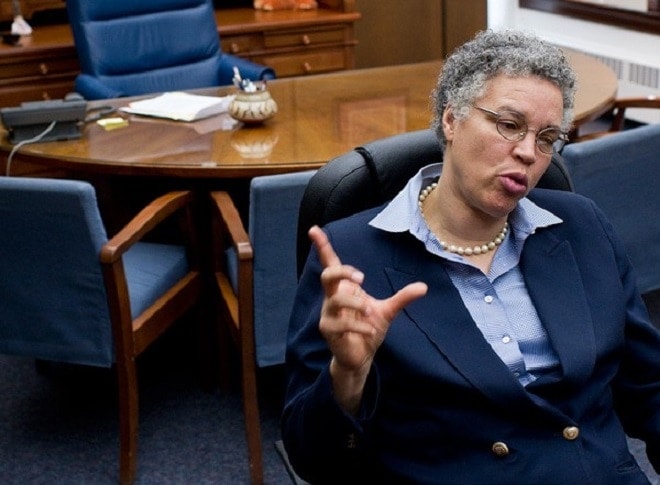 Cook County Board President Toni Preckwinkle thinks she has enough votes to tax every bullet sold in the county of more than five million. (Photo: Marc Monaghan/Chicago Reader)

Commissioners in the most populous county in Illinois are on the cusp of approving a measure that would add a tax to each round of ammunition sold.

Proposed by Cook County Commissioner Richard R. Boykin, the tax is a rehash of a 2012 proposal designed to address the county’s exploding homicide rate. That proposal, which mandated a $25 per gun and up to 5-cents per round of ammunition fee passed but without the bullet tax.

Now, with 465 people murdered with guns in Cook County so far this year, Boykin is back for the ammo.

And Cook County Board President Toni Preckwinkle thinks they now have enough votes on the 17-member board to push the measure through.

“Commissioner Boykin came forward with the idea, and I pointed out to him that we’ve tried this before, and only gotten eight votes. One of the votes that we had hoped for at the time was the vote of his predecessor,” she said.

The proposal, which Boykin and Preckwinkle editorialized in Monday’s Chicago Sun Times would mandate five cents per each centerfire round and one cent for rimfires such as .22LRs.

“We should tax bullets just as we do guns to help government address the costs of violence. Currently taxpayers who do not purchase a bullet pay the full cost of gun violence,” they wrote. “We believe this is a fair measure, to make the cost of the product more accurately reflect the costs it has on the county and society. It’s no different than taxing alcohol or tobacco.”

Earlier in the summer, Boykin proposed a seven-point plan to tackle gun violence in Chicago that blended a mix of social programs and increased law enforcement measures. These included seeking more Cook County Sheriffs in high crime areas, strict enforcement of curfew laws to keep urban youth off the streets at night, increasing penalties for those found with guns and appointing a Gun Violence Czar for the county.

If approved, Cook County will join Seattle who instituted their own tax earlier this year and picked up a lawsuit from gun rights groups over the matter while Los Angeles is mulling over the concept.