NRA got their hands on a smart gun, reports that it's not 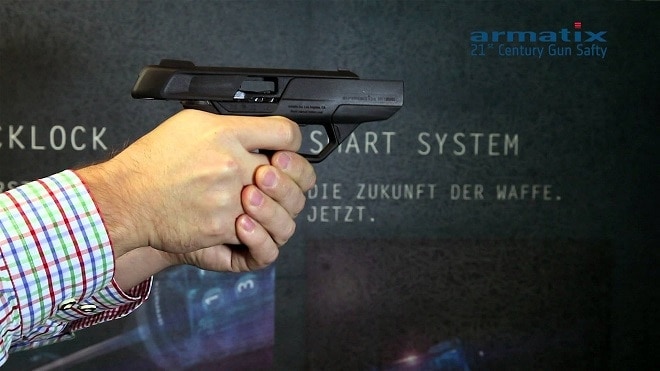 German based Armatix has had very little luck selling their iP1 smart guns in the U.S. and the NRA thinks they may know why. (Photo: Armatix)

The National Rifle Association on Wednesday published a review of the Armatix iP1 smart gun they have been sitting on for 16 months and it was not glowing.

The review, penned by Guns & Gear Editor Frank Winn for the gun right’s group’s America’s 1st Freedom magazine, was conducted in May 2014 by NRA staffers at an undisclosed location and could very well be the first and only outside test of the gun published.

The stated reason the group held off on publication was out of fear it would be seen as against the technology of personalized guns as a whole, which it contends, along with industry groups, that it is not.

“In truth, NRA has never opposed smart guns, believing the marketplace should decide their future. Rather, NRA opposes government mandates of expensive, unproven technology, and smart guns are a prime example of that,” said the group in an editorial prefacing the review.

What the review found was disturbing. Among the more glaring failures reported by the test team were:

Finally, questions over the possibility that the RFID handshaking between watch and gun could be hacked arose which, industry insiders familiar with the iP1 tell Guns.com, is very possible.

Nonetheless, it should be noted that NRA publications are not always spot-on with reviews, and very rarely issue a negative one.

In 2011, the NRA’s American Rifleman Magazine named the Taurus 740 Slim as that year’s Golden Bullseye awardee for Handgun of the Year. Since then, Taurus handguns have been the subject of a host of lawsuits, recalls and settlements although the company vigorously denies all allegations of wrongdoing and liability.

America’s 1st Freedom itself waxed poetic on Remington’s troubled R51 pistol, with Mark Keefe saying in Feb. 2014, “My expectations were high, and the gun did not disappoint.” However, problems soon surfaced with the R51 which ultimately led to an exchange and redesign.

To be fair, many other traditional gun magazines also carried glowing reviews of the R51 when it debuted, to which Lee Williams of the Sarasota Herald Tribune noted, “Gone are the days when you can trust the reviews in traditional gun magazines. They are no longer objective fact-based stories. They have become infomercials in print, with glossy picture.”

All of this may have the result of placing a political skew on the image painted by the NRA of the Armatix iP1 as a gun, regardless of its avowed embrace of the technology as a concept. For example, if The Trace, a journalism start up funded by Michael Bloomberg’s Everytown for Gun Safety, decided to do a firearm review of a Bushmaster AR-15, it would be hard for an objective outsider to give credence to their methodology if the end result was negative.

Nonetheless, Armatix’s silence on their guns, absence of attendance at firearms trade shows, and shadowy presentation have left a void in the marketplace where their guns are virtually impossible to see or review, which is uncharacteristic in the gun industry.

Even gun stores that carried the Armatix line aren’t talking about the guns anymore due to the intense backlash from the gun community over the concept of the iP1. In a recent interview with CBS on the technology, Maryland gun store owner Andy Raymond, who briefly carried the iP1, said, “I’d rather be shot by a ‘Smart Gun’ than sell a Smart Gun,” which is a good indicator on how strong the dialogue on the devices has become.

As the NRAs review is now the only substantial one on record for the iP1, the bar is set.

Here at Guns.com, we have reached out to Armatix — both at their California office and German headquarters — several times over the past few years in multiple ways, seeking to review an iP1 or some of their other offerings.  We are still waiting for a reply.