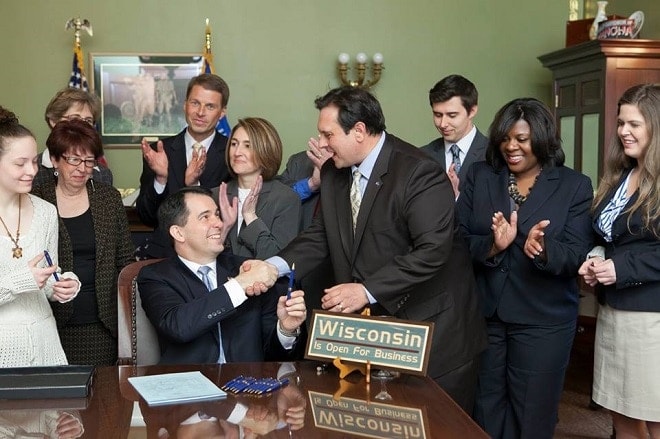 Among the measures signed is a bill to allow nonresident active military personnel stationed in the state to apply for a concealed carry permit and one to allow former law enforcement officers from other states to file an application to carry in Wisconsin instead of going back to their former department to obtain one, both of which passed with broad support. A third measure, which establishes a three-year minimum sentence for felons found with firearms, had a more contentious run through the legislature.

The bills were among 49 signed by Walker on Veteran’s Day without comment.

Assembly Bill 75 sets aside a current policy by the Wisconsin Department of Justice that all who apply for a concealed weapons permit be a resident by creating an exception for applicants who are residents of other states but are military service members stationed in Wisconsin for at least a year.

Assembly Bill 77 allows for former and retired law enforcement officers from states other than Wisconsin to apply to the state DOJ for a license to carry a concealed weapon under the guidelines of the Law Enforcement Officers Safety Act. Under current guidelines, former officers would have to return to their old departments for annual qualification. The new law would allow them to qualify at DOJ ranges in Wisconsin.

The final measure, AB 220, was the most controversial of the trio of bills signed. The bill establishes that felons found with a gun would have to be sentenced to a minimum of three years in prison. Those using a weapon in a violent crime would garner at least eight years.

Current Wisconsin state law, while authorizing a maximum $25,000 fine or up to 10 years in prison for a felon who has lost their firearms rights to be found in possession of one, has no minimum sentencing guidelines, meaning judges can authorize little or no jail time for those found guilty.

This aspect earned the opposition of some lawmakers in the legislature, who felt it was the wrong approach to keeping neighborhoods safe if not coupled with social programs. As such, the bill was almost derailed in close committee votes including a narrow 3-2 approval from the Senate Committee on Judiciary and Public Safety, and an earlier 6-3 vote in the Assembly Committee on Corrections, in each instance strongly opposed by urban Democrats.

“It is always encouraging to work across the aisle to pass important criminal justice legislation,” Kleefisch said Wednesday in a statement.

This article was updated to remove reference to a bill to allow active and retired Department of Corrections officers to carry inside gun free zones. That bill is in neighboring Michigan.