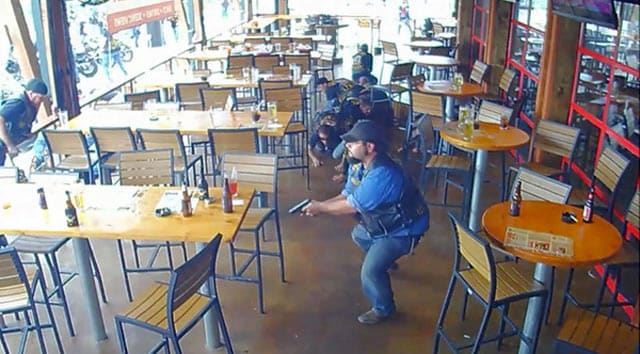 The McLennan County grand jury returned indictments Tuesday on 106 individuals who were present at a Waco Twin Peaks restaurant in May when a shootout erupted between two rival biker clubs and multiple law enforcement agencies, leaving nine dead and 20 wounded.

“This is just the beginning of what is an ongoing, continuing investigation,” said McLennan County District Attorney Abel Reyna in a brief statement announcing the indictments. “Eventually, all 177 cases will be put before this McLennan County Grand Jury. We are very pleased with the careful deliberation given to these cases by the grand jury.”

The indictments, which have not been made public, accused the named individuals of engaging in organized criminal activity, with some facing allegations of murder and aggravated assault.

Immediately following the shootout, which witnesses claimed started as a dispute over a parking spot and an apparent feeling of disrespect, 177 people were arrested and held on massive $1 million bonds, but eventually those bonds were reduced and all but a few of the individuals are now free on bond. Reyna indicated, however, that indictments on the remaining 71 individuals would be presented “at a later time.”

However defense attorneys indicated that they were prepared to fight the allegations as well, according to reports from The New York Times.

“What I would characterize it as, you couldn’t print,” said Houston attorney Pat Looney, referring to the indictments.

Looney represents Cody Ledbetter, one of the individuals indicted Tuesday, but both men maintain Ledbetter’s innocence. Looney said his client was wrongfully arrested and pointed out that Ledbetter has “never been in trouble a day in his life.” Looney said Ledbetter will “absolutely” plead not guilty to the charges.

Dallas attorney Clint Broden, who represents Matthew Clendennen, also claims his client was unjustly arrested and is innocent of the allegations brought against him. In fact, Clendennen, a former firefighter, said he took cover in the restaurant’s hallway when the violence erupted and was in no way involved in the deadly brawl.

Broden added that Clendennen’s reputation has been tarnished due to the allegations against him and his so-called involvement in the incident. Broden said the damage has only been multiplied by the fact that – due to a gag order – his client has been unable to speak about the incident for the past five months and essentially stripped of his right to free speech.