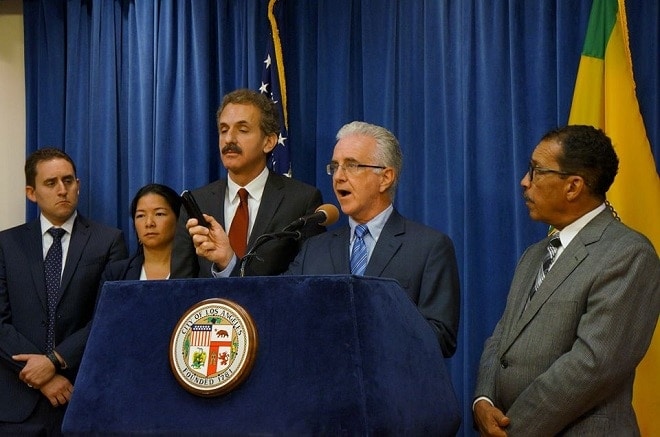 City Councilman Paul Krekorian is urging those with now banned magazines “dispose of them” at a Los Angeles Police Department station before Nov. 19. (Photo: Facebook)

A California court on Thursday refused to halt Los Angeles’s enforcement of a new ban on magazines capable of holding more than 10 rounds.

The effort, mounted by gun rights advocates, law enforcement groups and county sheriffs in California, sought an injunction against implementation of the ban in Superior Court as part of wider litigation challenging the ban. While the challenge will proceed, the ban will as well.

People who currently possess such magazines, many for collectible firearms legally registered decades ago, have until Nov. 18 to turn them into police without compensation, sell them, or move them out of the city.

Mayor Eric Garcetti signed the citywide ordinance in August prohibiting the ownership of what the state deems large-capacity detachable firearm magazines with no exception for grandfathered magazines or those possessed by law enforcement who live outside the city. The controversial measure was introduced by City Councilman Paul Krekorian and passed the council by unanimous vote.

“I’m pleased, but not surprised that the Superior Court rejected the NRA’s meritless attempt to block LA’s common-sense ban on the possession of large-capacity magazines,” said Krekorian in a statement. “Next week, ‪‎Los Angeles‬ will start enforcing and upholding the ban. I urge anyone currently in possession of these illegal magazines to dispose of them legally at a Los Angeles Police Department station before Nov. 19.”

Challenging the measure is the California Rifle and Pistol Association – the state’s NRA affiliate – naming the city, Garcetti, and Los Angeles Police Chief Charlie Beck as defendants. A number of county sheriffs, the Law Enforcement Alliance of America and the California Reserve Peace Officers Association joined CRPA as initial co-plaintiffs.

Since the case hit the courts, three more sheriffs, those of Yuba, Sutter and Colusa counties, have joined the suit bringing the total number of sheriffs taking on the city to at least 33 out of 58 in the state.

Attorneys spearheading the case, who are challenging the city’s ordinance as a violation of state preemption law among others, caution the legal battle is just beginning.

“This is far from over,” C.D. “Chuck” Michel, who represented the CRPA and others in the Peruta may-issue case, told Guns.com Thursday. “Basically the court merely denied injunctive relief, finding that people were not “irreparably harmed” by having to remove their magazines from the city while this is litigated. The preemption argument was not decided, and remains to be.

Michel cautioned those affected by the ban be wary while the case is litigated. To assist with this the CRPA has developed a compliance and rights guide.

“Meanwhile, gun owners should know their rights and be careful about cooperating with police lest they become unwitting victims of this and other counterproductive city gun laws. That uncooperative attitude is an unfortunate but inevitable consequence of these kinds of bans,” said Michel.

The next court date is in April.