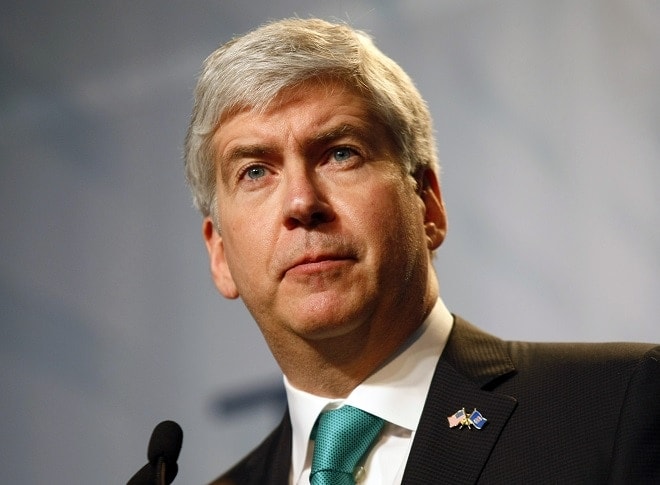 The two measures, introduced in September, would end the curious practice that permit holders could only carry in these designated pistol free zones if their weapon was visible and replace it with one in which CPL holders could apply for an exemption to the zones themselves. The bill passed the Senate Judiciary Committee in a 4-1 Republican-heavy vote last month.

Snyder, who vetoed a similar bill in 2012, this week told radio talk show host Steve Gruber, “I stand by that decision,” and affirmed when pressed that he would veto the latest attempt to expand legal concealed carry into gun free zones saying, “I’ve done it before.”

Snyder contends that unless a proposal allows for local control over gun free zones, he would be against it.

The two bills under threat, Republican Sen. Mike Green’s SB 442 and Majority Leader Arlan Meekhof’s SB 561, allow for an exemption to gun free zones for permit holders who apply for and are granted an endorsement. This form of “enhanced carry” is in use in other states such as Mississippi where permit holders obtain additional training and then, after providing a certificate from a state-approved instructor, are granted an endorsement, which allows legal carry inside most places publicly posted as being gun-free.

However, if approved in its current form, open carry in those same areas would be prohibited under Meekof’s companion legislation.

The two bills are tie-barred, meaning that Snyder could not veto SB442 – the bill allowing for concealed carry – while signing SB561, closing the current allowance for open carry by permit holders on schools and other areas. They must either fail or succeed together.

Sponsors contend, if adopted, the reform is a move for the better.

Green argues the bills simply allow those with concealed carry permits to do so with their guns in these areas, as forcing them to open carry can sometimes cause friction with local authorities.

“I want folks to be able to defend themselves wherever they are legally allowed to be, but locking down a school and causing a disruption in the learning process is not beneficial to anyone,” Green said.

Both measures are headed to the full senate for consideration.