Donald Trump on Paris attacks: 'Nobody had guns but the bad guys' 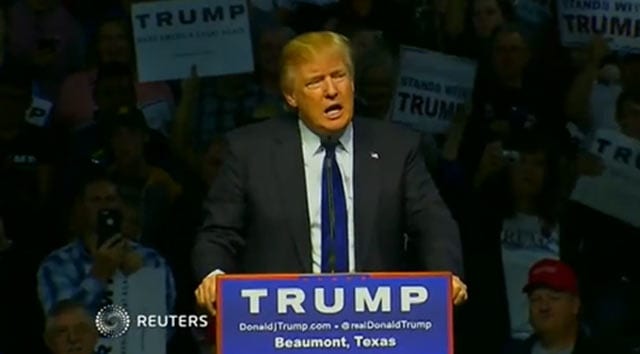 While addressing a crowd in Beaumont, Texas, Saturday afternoon, presidential hopeful Donald Trump indicated the high number of casualties resulting from a terrorist attack in Paris on Friday could have been reduced if it wasn’t for France’s over-the-top gun control laws.

“When you look at Paris – you know, the toughest gun laws in the world in Paris – nobody had guns but the bad guys. Nobody. Nobody had guns, and they were just shooting them one by one,” Trump said a short time after leading his hour-long speech with a moment of silence for the victims of the terrorist attacks, The Washington Post reported.

“You can say what you want, but if they had guns – if our people had guns, if they were allowed to carry – it would have been a much, much different situation,” he said.

Trump went on to say that in the United States, the cities with the toughest gun laws – like Chicago – have the highest rates of violence and the most problems with guns, shootings and homicides.

“So our country better get smart,” he said, “because we’re not smart right now.”

Trump’s weekend message reiterated a similar sentiment he shared via Twitter in January, following a much smaller attack at the Charlie Hebdo offices in Paris that left a dozen people dead.

“Isn’t it interesting that the tragedy in Paris took place in one of the toughest gun control countries in the world?” Trump qrote in the January tweet, which has since been spread around through social media once again.

But while many applauded the recirculated message, Gerard Araud, the French ambassador to the United States, found it distasteful.

“This message is repugnant in its lack of any human decency. Vulture,” Araud tweeted to Trump.

In addition to talking gun control, Trump said the details of the Paris attacks show why allowing Syrian refugees into the United States is not a good idea, citing that at least one of the terrorists responsible for the Paris attacks was Syrian.

Trump indicated the refugees could simply be a terrorist army in disguise and vowed – just as he did previously in September – that if elected president, he will not allow the Syrian refugees to stay in the country.