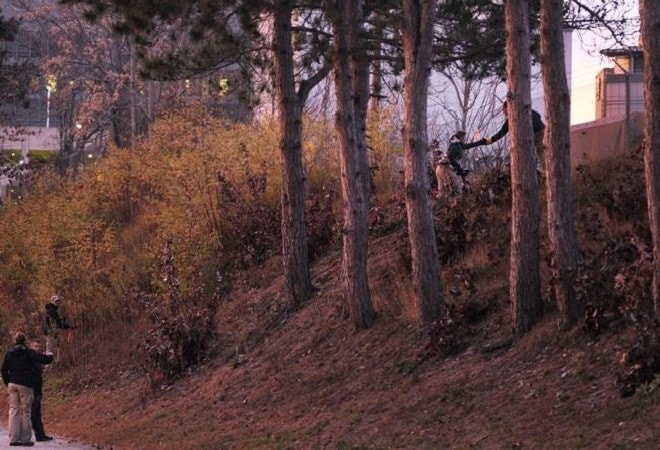 Police in Worcester, Massachusetts, are probing the theft of more than a dozen guns from a U.S. Army Reserve center in a weekend burglary.

Thieves apparently entered the facility through the building’s roof sometime late Saturday and broke into a storage locker containing the weapons, officials revealed in a multi-agency press conference Sunday. The building’s alarms may have been compromised due to recent construction.

“The FBI is aware that some weapons are missing as a result of the break in at the Army Reserve Center in Worcester, Massachusetts. We have entered those weapons into NCIC, a national database, and alerted our federal, state and local law enforcement partners,” said FBI representative Kristen Setera.

Although authorities have not detailed exactly what was taken, a law enforcement source told the Daily Beast the stockpile of stolen arms includes six M4 rifles, 10 M9 Beretta handguns and “several long guns.”

Although the news of the break-in was announced by Gov. Charlie Baker at a security update given in response to a terrorist attack in Paris, France, that claimed the lives of more than 120, authorities downplayed fears of terrorism associated with the missing weapons.

“There is no indication that these missing weapons are connected to any kind of terrorism threat whatsoever. Nevertheless, every effort will be made to recover these weapons immediately,” Setera said.

The two-building Lincoln W. Stoddard Army Reserve Center on N. Lake Avenue was built in 1953 and is in a mixed residential, institutional and commercial area of Worcester as noted by an environmental report on file with the state. It is sandwiched between the University of Massachusetts Memorial Medical School, a state public works site and Quinsigamond State Park.

Investigators Sunday evening were combing the hillside of the UMass center next to the armory for evidence as reported by the Worcester Telegram and Gazette.

Massachusetts has some of the strongest gun laws in the country, including requiring a firearm identification license to purchase both handguns and long arms, an assault weapon ban with limits on magazine size, prohibitions on some NFA-regulated weapons and a harsh “may issue” concealed carry permitting scheme.

Meanwhile, in light of the recent Paris attacks, Baker also downplayed the possibility this incident was linked to terrorism.

“While there has been no credible threat to our state, law enforcement teams will remain in constant contact with our federal and local officials to ensure the safety and security of our citizens,” Baker said.