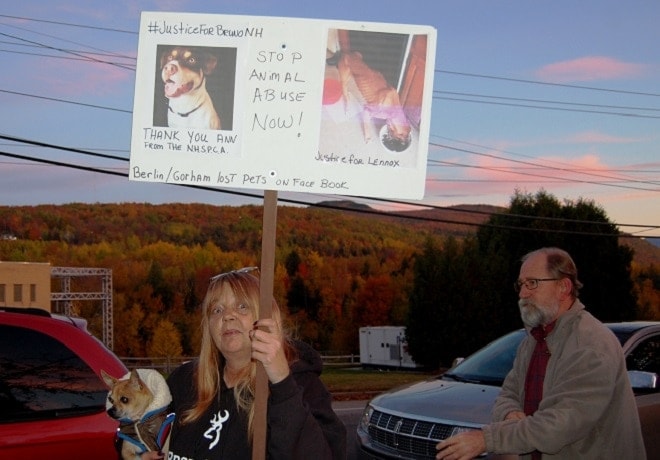 Members of the Justice for Bruno campaign want to criminalize the use of guns to put down domestic animals in the state. (John Kozio/New Hampshire Union Leader)

Following the controversial shooting of a dog in New Hampshire by its owner, advocates are pushing to ban the use of guns for euthanasia.

The group, Justice for Bruno, takes their name from that of a brown-and-white, mixed breed dog who was found dead in the Berlin area, shot four times by its owner. Bruno’s owner, who adopted the dog from a local shelter, advised the animal had on multiple times bitten a child and, after trying but ultimately failing in an attempt to give the dog away via Facebook, put the animal down.

While police investigated the matter, in the end the owner was not charged, as it is not illegal to euthanize personal animals that are sick, old, dangerous, or unwanted in New Hampshire. This has the animal rights advocates now seeking to make it a felony to shoot a pet in the state.

“It was done in such a cruel manner. The dog was shot multiple times and left to die,” said Katie Treamer, one of the founders of Justice for Bruno. “In this day and age, it’s just not a responsible way to euthanize a pet.”

In September, Treamer started a Change.org petition for the drive that has since ballooned to over 36,000 supporters. Then followed a protest walk by the advocates through Berlin last month where organizers pointed out the shelter who had arranged Bruno’s adoption would have taken the animal back.

“It never had to happen,” said Moriah Vincent, who helped found the movement.

According to data from the American Veterinary Medical Association, euthanasia laws — especially concerning that of companion animals — vary widely from state to state. Further, emergency euthanasia, in cases where veterinary care may not be immediately available, is widely authorized even in areas that are otherwise highly regulated.

The Iowa State University College of Veterinary Medicine classifies the method as acceptable, saying when “Properly applied, euthanasia by either gunshot or penetrating captive bolt (combined with procedures to ensure death), causes less fear and anxiety and induces a more rapid, painless, and humane death than can be achieved by most other methods,” though cautions it should only be used by those with experience and skill.

With that, lawmakers see any successful movement to criminalize putting down animals in New Hampshire as far unlikely for now.

“It’s been common practice for people up here to put down their animals – not just dogs – because they’re hurt in such a way that they can’t be saved or they’re so old that they need to be relieved of suffering,” said state Rep. John Tholl, R-Coos. “And the cost to do that through a vet is quite expensive.”