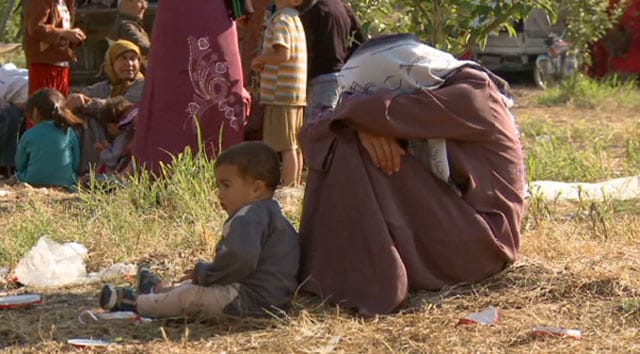 More than half of the 11 million displaced Syrians seeking refuge are women and children. (Photo: CNN)

As of late Monday, more than two dozen governors have stepped up and made it known that Syrian refugees will not be welcome in their states.

The refusal of the refugees came after one of the terrorists responsible for the brutal attacks in Paris over the weekend was determined to be Syrian. State leaders cite safety concerns over the displaced Syrians, with no plausible way to accurately screen those seeking refuge in the United States.

Since 2011, more than 250,000 people have lost their lives in the war-torn country and another one million have been wounded or permanently disabled, while approximately half – 11 million people – of the Syrian population have fled from their homes to find safety elsewhere. According to the United Nations, Syrians now make up the world’s largest refugee population, but still, the vast majority are still struggling to find solace anywhere in Europe.

Currently, about 1,500 Syrian refugees have been granted safe haven in the U.S., but in September, President Obama announced that the country would accept another 10,000 refugees next year – an idea that does not sit well with some, as reported by CNN.

“American humanitarian compassion could be exploited to expose Americans to similar deadly danger,” Texas Gov. Greg Abbott said in a letter addressed to Obama, referring to the Paris attacks.

Abbot said security comes first and that the state of Texas will not accept any Syrian refugees. Abbott also demanded the rest of the U.S. “act similarly.”

Georgia Gov. Nathan Deal issued an executive order Monday to prevent the resettlement of Syrians in his state, and will stand firm on his decision “until the federal government and Congress conducts a thorough review of current screening procedures and background checks,” of those entering the country.

Michigan Gov. Rick Snyder also said they would hold off on accepting refugees.

“Michigan is a welcoming state and we are proud of our rich history of immigration,” Snyder said in a statement. “But our first priority is protecting the safety of our residents.”

Snyder, who demanded the Department of Homeland Security review policies for screening refugees, also added that the attacks in Paris came from an extremist group and shouldn’t be projected as the ideals held by all people of Middle Eastern descent both here in the U.S. and around the world. Nonetheless, while addressing a crowd in Turkey, Obama called the idea of religious testing for refugees “shameful.”

But do state governors have the authority to keep refugees out of their territories? Not exactly, according to American University law professor Stephen I. Vladeck. 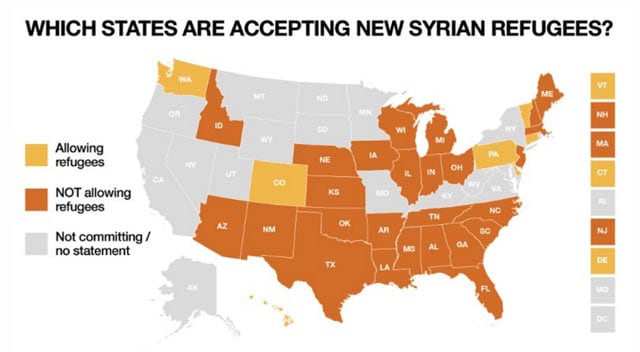 “Legally, states have no authority to do anything because the question of who should be allowed in this country is one that the Constitution commits to the federal government,” Vladeck said. “So a state can’t say it is legally objecting, but it can refuse to cooperate, which makes things much more difficult.”

Regardless, the Council on American-Islamic Relations indicated that to take such actions against refugees will only contribute to the problem.

“Defeating ISIS involves projecting American ideals to the world,” the group said in a statement. “Governors who reject those fleeing war and persecution abandon our ideals and instead project our fears to the world.”