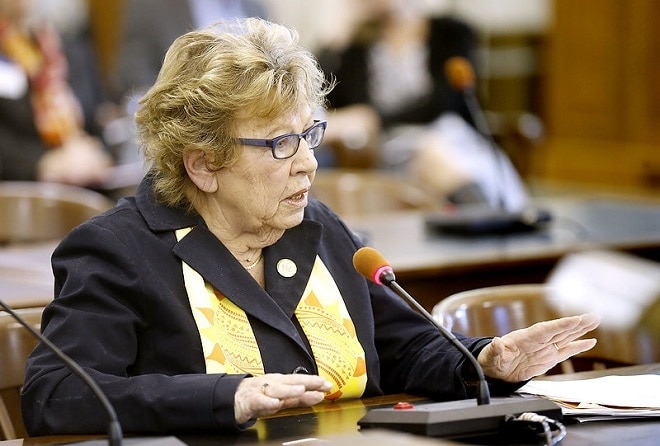 Legislation swapping New Jersey’s current smart gun law for one requiring dealers to carry the gun in stock is now headed to the full senate.

Introduced last week by State Senate Majority Leader Loretta Weinberg – who crafted the state’s current divisive smart gun mandate – the proposal requires dealers to carry at least one model of smart gun when they become available rather than sell them exclusively. The rapidly moving bill passed the Senate Law and Public Safety Committee on Monday in a 3-2 partisan vote.

“If we can limit the use of guns by those who are not the rightful owner, and prevent the loss of more lives to gun violence, it is our responsibility to do so,” said Weinberg. “New Jersey’s Childproof Handgun Law was revolutionary and has been successful in facilitating the development of ‘smart guns.’ The advancement of technology has not moved as fast as we would have liked, but we cannot give up on common sense reforms that will support this effort.”

Gun rights advocates were on hand Monday to argue even the new watered down proposal would hinder technological advancement of any personalized gun.

“Our message is simple: If you want this technology to develop, take the mandates out,” Scott Bach, executive director of the Association of New Jersey Rifle and Pistol clubs told the committee. “Take government hands off the process and let the technology develop naturally. Let’s see if there’s a market.”

Weinberg’s proposal is likely headed to passage by the senate but its path to enactment is by no means guaranteed.

The Republican-controlled Assembly, who has not taken action on a companion measure, A4717, may be a wild card in the push to recast the Garden State’s hibernating smart gun laws. Finally, any new bill would have to win the approval of Gov. Chris Christie, who has vetoed numerous gun control measures this session.