Hate crimes in U.S. down, but attacks against Muslims up 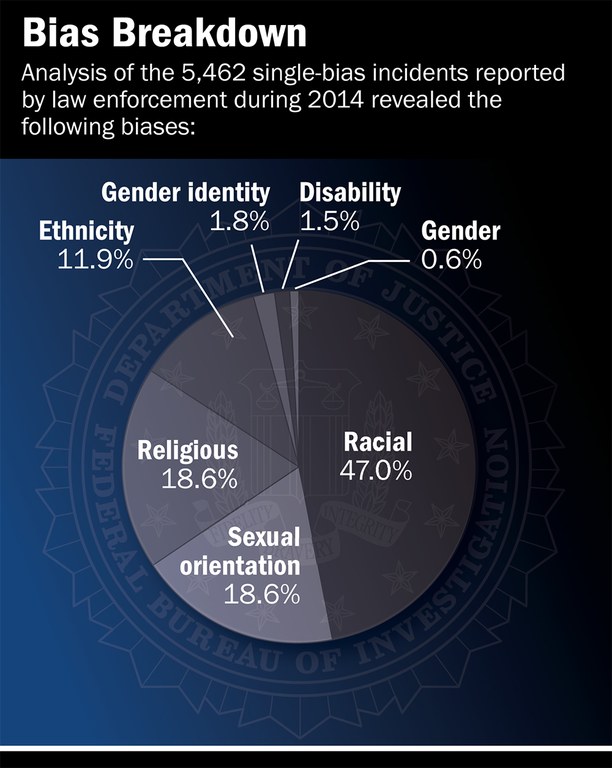 A new report on hate crime statistics shows a slight drop in offenses in 2014 but comparable figures for the leading target groups and an increase in attacks against Muslims.

Approximately 15,494 law enforcement agencies contributed to the report, but only 1,666 agencies reported hate crimes within their jurisdiction.

Attacks based on sexual orientation were down by 216, with 1,017 and the majority of which, 599, were against gay males. However, attacks based on gender identity more than tripled with a total of 98 being reported. However, this is the second year hate crimes targeting transgendered people have been collected.

Religious attacks were down by 17 from last year with 1,014 attacks. Of those, 609 were against those of the Jewish faith and 154 were against Muslims.

While applauding the decrease offenses across the nation, civil rights groups raise concerns about the increase in attacks against Muslims, which rose by 14 percent from last year. The Southern Poverty Law Center fears the rate is destined to accelerate.

“Given the Charlie Hebdo and other attacks in early 2015, along with the most recent Islamist slaughter in Paris, anti-Muslim hate crimes seem bound to rise again in 2015,” said Mark Potok, a SPLC senior fellow, in a statement.

He pointed to a larger dataset presented by the Bureau of Justice Statistics, which he says show nearly 260,000 hate crimes annually in America. He said he shear volume suggests anti-Muslim hate crimes could be as many as 6,000 or more.

“The anti-Muslim numbers have been rising slowly but steadily since 2012. In that period, ISIS beheadings and other atrocities have pushed radical Islam into the news in a way that almost certainly has fueled anti-Muslim hatred,” he said.

The FBI said next year’s Hate Crime Statistics report, which will cover 2015, will expand racial bias types in the religion category and add “anti-Arab” under the category of race/ethnicity/ancestry.