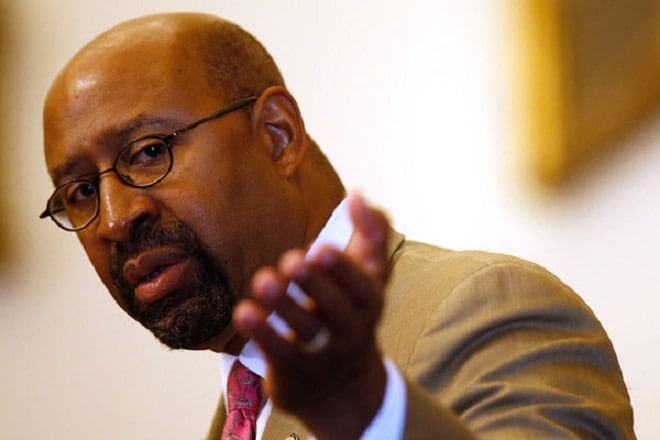 Coming on the heels of the Paris tragedy, Philadelphia Mayor Michael Nutter remarked Monday there is no distinction between gun violence and international terrorism.

The comments came after a meeting with U.S. Attorney General Loretta Lynch and the U.S. Conference of Mayors in Washington D.C., as reported by the Associated Press.

“There is really no level of distinction between the violence that goes on, on the streets of America on a daily basis and the episodic acts of international terrorism that also take place – primarily in cities,” Nutter said.

The controversial city leader, a member of former New York Mayor Michael Bloomberg’s Mayors Against Illegal Guns organization who has backed numerous gun control schemes, contends steady urban violence in the nation’s largest cities creates the same level of horror, say, in Philadelphia which has suffered 240 homicides so far this year, as with Paris’ loss of 129 people at the hands of radical Islamic terrorists last weekend.

“Citizens around the world feel unsafe because of international terrorists … those same feelings exist for many in (American) communities,” Nutter said. “These criminals are terrorizing our citizens and that same level of fear of violence, the death of citizens, the destruction of property, are the same.”

The mayor is not the only member of the Bloomberg camp that sought to link the concept of domestic gun violence to the Paris attack. Within hours of the incident on Saturday, Moms Demand Action founder Shannon Watts posted a graphic of the Eiffel Tower that read, “We are united in mourning all victims of gun violence.”

Second Amendment advocates, however, argue Nutter’s characterization is off base.

“The real reason people feel unsafe is because of politicians like Nutter who want to deny them the means to defend themselves,” Alan Gottlieb, the chairman of the Citizens Committee for the Right to Keep and Bear Arms and the founder of the Second Amendment Foundation, told Guns.com Tuesday.

“The real domestic terrorists are anti-rights mayors like Nutter and not lawful gun owners who use firearms for self-defense. Whether it be terrorism or street crime the first responder is the potential victim and not law enforcement. When seconds count the police are minutes away at best,” Gottlieb said. “The people in Paris wish they had a Second Amendment.”

Nutter, who is stepping down at the end of his term, will be replaced in office by former city council member Jim Kenney.

He leaves in his wake a number of gun issues including a class action lawsuit involving the 2012 release of some 3,265 concealed carry applicants’ personal information that incurred a $1.4 million settlement from the city last year.