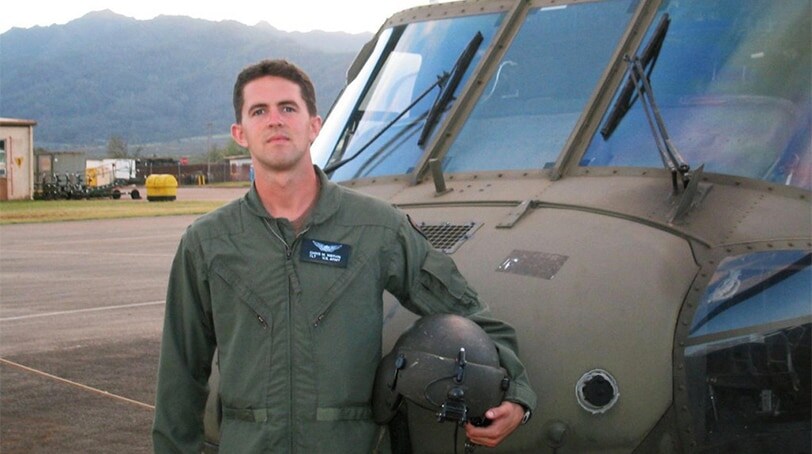 1st Lt. Chris Marvin stands in front of a UH-60L Blackhawk helicopter at the Wheeler Army Airfield in Hawaii. He medically retired from service at the rank of captain after being severely wounded in Afghanistan.

After a mass shooting in this country, there is always a period of reflection and deliberation – some people wonder how they’d react in a similar life-threatening situation. The United States military teaches its troops that when action must be taken and there’s no time to think, you’ll fall back on the training you received before the conflict.

That’s what happened at an Oregon community college campus in early October, when a gunman’s shooting rampage was reportedly stopped by an unarmed Army combat veteran, who ran toward the sound of gunfire. He reacted just as he was trained to.

That day, there was also another veteran on campus, and this one was armed with a concealed handgun. After contemplation, instead of running toward the shooting as first veteran did, he stayed put.

It was likely because he was “without knowledge of the tactical environment, he held his post,” wrote Christopher Marvin, a former Army Blackhawk pilot and unabashed supporter of Everytown for Gun Safety. Marvin called on other veterans in his writing last week to stand up as model gun owners.

Marvin told Guns.com that he believes the training he and other former service members received can help to play a role in decreasing gun violence in the United States.

“When Oregon happened, there was an interesting anecdote of how vets would behave during a shooting,” Marvin said. “In the way they behaved, they both most likely saved lives.”

Marvin noted that the armed student, an Air Force veteran, said he didn’t want to be confused with the shooter by police, a concern some in law enforcement have voiced as a potential issue in states that allow open and concealed carry.

Marvin has said that because many veterans typically receive extensive firearms training, and thus have more awareness of the realities of gun violence, they should be the voice of reason when it comes to supporting background checks for all gun purchases. This would include online and gun show purchases, and in keeping guns out of the hands of known domestic abusers, stalkers, and the mentally ill.

“When it comes down to it, look at the way the military controls guns,” Marvin said. “I was a Blackhawk helicopter pilot and carried my weapons on missions. In garrison, I didn’t carry a weapon around, but the military police did.”

Our military is a great example of how gun violence can be reduced by advocating for similar gun safety measures that the military employs, Marvin said, adding that more moderate gun owners realize that compromise is an important stance in the gun debate and that veterans and others with relevant experience should take the lead.

“It’s veterans who can temper the voice,” Marvin said.