Facebook will use ‘safety check’ button for 'more tragic events' 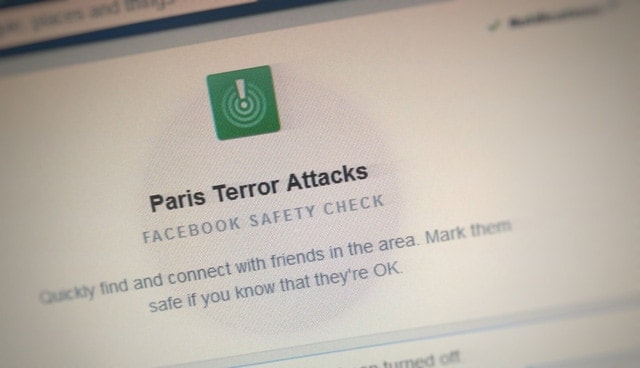 The Facebook Safety Check button during the Paris terror attacks.

In the immediate aftermath of the horrific attacks in Paris, Facebook activated its “safety check” button that allows users to communicate on Facebook that they’re okay.

The functionality was originally released during the devastating 2011 tsunami in Japan and again used in 2015 after an earthquake in Nepal, but Facebook founder Mark Zuckerburg said the company will be changing protocol and use it for tragic incidents as well.

“After the Paris attacks last week, we made the decision to use Safety Check for more tragic events like this going forward,” he wrote on his Facebook page following Tuesday night’s bombing in a Nigerian market that left 32 people dead. “We’re now working quickly to develop criteria for the new policy and determine when and how this service can be most useful.”

In his short post, he touched on the reasoning behind the change, saying “unfortunately, these kinds of events are all too common.”

However, in the bulk of his message he tried to reassure readers by reminding them that this day and age that as a world we’re the safest we’ve ever been.

“In times like this, it’s important to remind ourselves that despite the alarming frequency of these terrible events, violence is actually at an all-time low in history and continues to decline,” he said.

He added, “Please don’t let a small minority of extremists make you pessimistic about our future.”

“A loss of human life anywhere is a tragedy, and we’re committed to doing our part to help people in more of these situations,” he said.