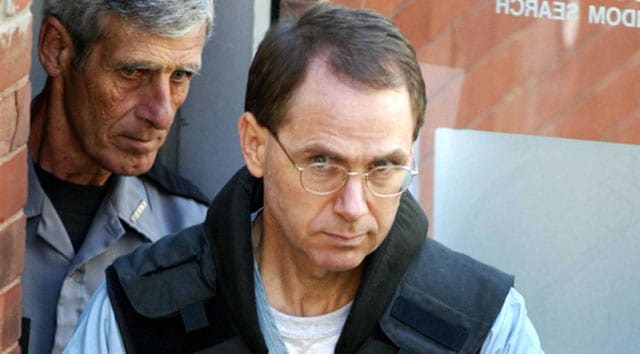 While serving 161 life sentences without the possibility of parole, Terry Nichols won’t ever see his guns again, but wants his ex-wife to have them instead. (Photo: Associated Press)

More than a dozen firearms owned by Oklahoma City bombing conspirator Terry Nichols is at the center of debate, with federal prosecutors calling for the weapons to be destroyed and Nichols asking they be handed over to his ex-wife in lieu of outstanding child support.

The 13 rifles, handguns and shotguns were seized from Nichols’ Kansas home more than 20 years ago following the bombing of the Alfred P. Murrah Federal Building in Oklahoma City that left 168 people dead. Nichols was convicted of conspiring to use a weapon of mass destruction and involuntary manslaughter of eight federal agents, but the guns seized from his home played no part in the bombing.

Senior U.S. District Judge Richard Matsch argued that Nichols was not out to have his guns returned “for his own personal gain but rather solely for the benefit of his ex-wife,” admitting that her location is not currently known, the Associated Press reported.

Nichols, who argued that he is unable to pay child support to his former wife while serving his 161 consecutive life sentences, wants the guns to go to her, but court filings show prosecutors’ concerns that – given their infamous owner – the firearms could be sold and used in copycat crimes. Prosecutors instead simply want them destroyed and the value of the weapons applied to the restitution owed by Nichols, which exceeds millions of dollars.

Assistant U.S. Attorney Amy L. Padden said Nichols’ firearms should only fetch fair market value and no more “simply because of his status as a domestic terrorist and the notoriety of the crimes he committed.” Padden pointed to the case of Unabomber Ted Kaczynski who also asked for the return of his firearms, but those with whom he owed restitution were allowed to obtain the guns and turn around and have them destroyed to avoid them being used in other crimes.

Furthermore, Padden added there is no evidence that Nichols was ever ordered to pay child support, and in his particular case, the victim owed restitution is the United States.