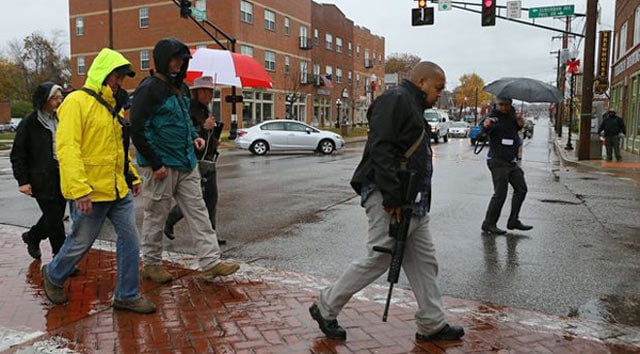 Some participants were armed with rifles, while others carried umbrellas. (Photo: David Carson / St. Louis Post-Dispatch)

A handful of Second Amendment supporters weathered the storm in Ferguson on Monday for an open carry demonstration aimed at educating the public about their rights.

The event, which was organized by former area spokesman for Oath Keepers, Sam Andrews, started on the infamous Florissant Avenue, the site of rioting, looting and violence following the fatal shooting of 18-year-old Michael Brown by Ferguson Police Officer Darren Wilson in August last year, and concluded at the police headquarters, about three blocks away.

Before any steps were taken, participants gathered together for a moment of silence and prayer for the victims of Friday evenings attacks in Paris.

Andrews hoped to have around 100 people participate in the march, but according to the St. Louis Post-Dispatch, only about a dozen people showed up. Andrews, who said last week that part of the goal with the event was “to show that this right is not just for white people,” wasn’t exactly surprised by the lack of participation though, especially among the black community. 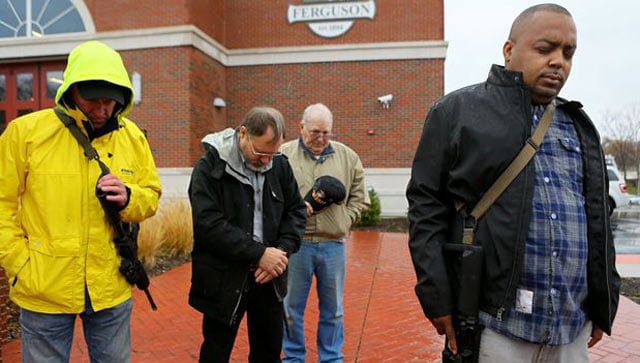 “The police have so intimidated the black people that they don’t even believe they have rights,” Andrews said. “That’s the problem. That’s why we’re here. So either way, we make the point.”

Paul Berry, who appeared to be one of the only black participants, spoke to the small crowd about the importance of protecting gun rights. Berry, a 37-year-old bail bondsman, said he is considering running for congressional seat currently held by U.S. Rep. William Lacy Clay.

Like Andrews, Berry hoped for a more diverse crowd, with more African-American participants, but Andrews, a local gun shop owner who is white, said a number of the individuals he spoke with expressed fear at participating in such a demonstration. Andrews said black residents were concerned with how it would appear for them to openly carry weapons and if they did so, “they’d probably be shot.”