1 dead, 3 in custody after teens break into San Antonio home 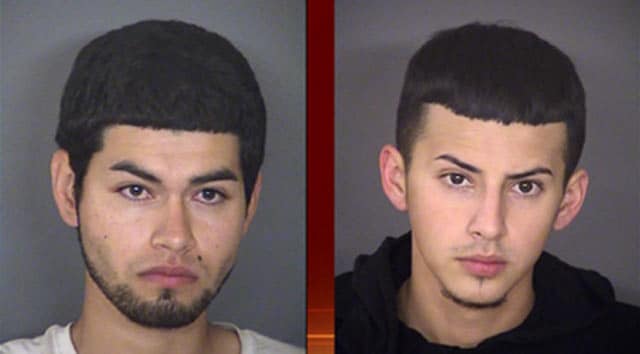 Juan Zamora, 17, and Efrain Torres, 18, along with an unnamed 16-year-old were charged with burglary. (Photo: KSAT)

A 19-year-old girl is dead and her three teen accomplices behind bars after they broke into a San Antonio home Friday morning only to be met by a homeowner armed with a shotgun.

The four suspects gained entry into the home by removing an air conditioning unit from a window, but just as they were making their way inside, the homeowner awakened and armed himself with a shotgun, according to reports from local media.

The girl, who was later identified as Priscilla Elizondo, 19, was already inside when the homeowner opened fire and struck her multiple times. At that point, the remaining three suspects left the girl and fled from the home.

Elizondo was pronounced dead at the scene shortly after officers arrived. A knife was found lying next to her body and near her was a bag containing a gun, several burglary tools and a checkbook that belonged to the homeowner’s wife.

The three remaining suspects were located at a house the next street over and were found to be in possession of several items that were taken from the house where Elizondo was killed. The remaining suspects, who were identified as Juan Zamora, 17, and Efrain Torres, 18, were arrested, charged with burglary and currently remain in jail with bonds totaling $20,000 each.

The fourth suspect, who is 16 years old, had a graze wound to his chest, but was otherwise not seriously injured. He was also arrested and is currently being held at a juvenile detention facility. Due to his age, his name was not released.

The homeowner is not expected to face any charges. He said he and his family, which includes three children, are all okay and are trying to just get past the incident.

Juan Galvis, who lives next door and heard the gunfire erupt during the break-in, told reporters it was not the first time the family had been targeted for a burglary.