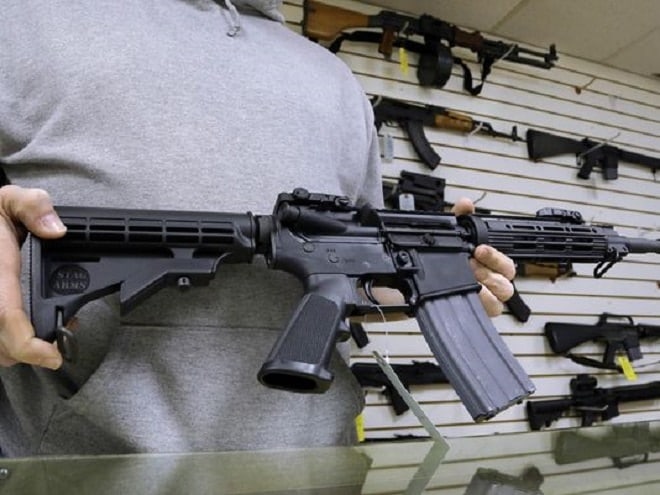 “These weapons are designed with only one purpose: to kill as many people as possible in the shortest possible amount of time,” contends the VPC. (Photo: AP)

Josh Sugarmann, who wrote extensively on gun control, was the communications director for the National Coalition to Ban Handguns and is credited with coining the term “assault weapon,” founded the VPC in 1988

One of the group’s longstanding campaigns has been to denounce the use of guns so classified and on Wednesday, they repeated the call.

“In light of new concerns over terrorism, we should rethink our policies that allow military-style assault weapons to be purchased by virtually anyone — including potential criminals and terrorists,” reads a statement from the group on their Facebook page.

“There is no reason for assault rifles, assault pistols, and assault shotguns to be sold on the civilian market. These weapons are designed with only one purpose: to kill as many people as possible in the shortest possible amount of time,” says the VPC.

The group has been outspoken in its support of gun control measures for decades. This has included the production of studies that contend guns are more dangerous than cars yet are not regulated the same, most murders and suicides are attributed to firearms, defensive gun use is a rarity and that many concealed carry permit holders turn into violent killers.

These studies have been the subject of ridicule by Dr. John Lott who maintains the group uses inaccurate information, recycled data and miscalculated math to arrive at cherry-picked statistics.

In response, the VPC has criticized Lott’s own work, describing his view that arming the populace with lawfully concealed handguns will reduce crime as being “extremist.”