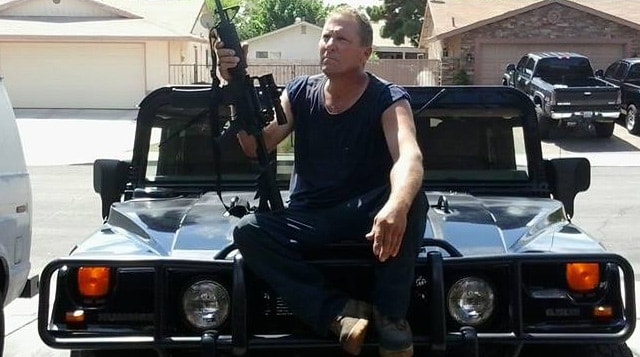 This photo of Tyrone Paul Ponthieux, 55, was described in the complaint. (Photo: Facebook)

A Las Vegas man was indicted for writing threats against President Obama in a post on Facebook last year, according to court documents unsealed this week by a Nevada federal court.

According to the complaint, Ponthieux wrote the threat on his social media page on Nov. 2, 2014, among his many posts sharing information about the infamous Illuminati.

“I think we all need to get our guns and shoot all of these out of control congressmen and senators and Obama! Any survivors, hang them, then try their dead bodies for High treason!” the post reads.

A screenshot of the rant in its entirety. (Photo: Facebook)

The rant continues with words like “fuck” and “fucktards” peppered in the last couple sentences before closing with “FUCK AMERICA IN THE ASS!”

He told authorities he wrote the post, and others like it, because he’s angry and frustrated with the U.S. government. He told them he believes the government no longer supports the American people and he feels that it’s Obama’s fault.

Federal authorities learned about the rant after Las Vegas police began investigating a tip they received on April 27 from Ponthieux’s neighbor, who overheard Ponthieux asking someone over the phone about obtaining ammonium nitrate — a chemical used in explosives.

Ponthieux also said during the call that he may be killed, but not before he takes out a few of them first, the complaint says.

While he was indicted on the aforementioned charges, the complaint lists drug and drug trafficking charges as well.

When agents with the Federal Bureau of Investigation’s Las Vegas Terrorism Task Force interviewed Ponthieux, he admitted to posting several death threats toward U.S. senators, congressmen and President Obama via Facebook over the past few months. He also told them he used meth once a week and that there was a bag of marijuana at the home.

During a search the home, agents found several firearms including an AR-15, shotgun, several .22-caliber rifles, two pistols, and 362.8 grams of marijuana, but they did not have explosives.