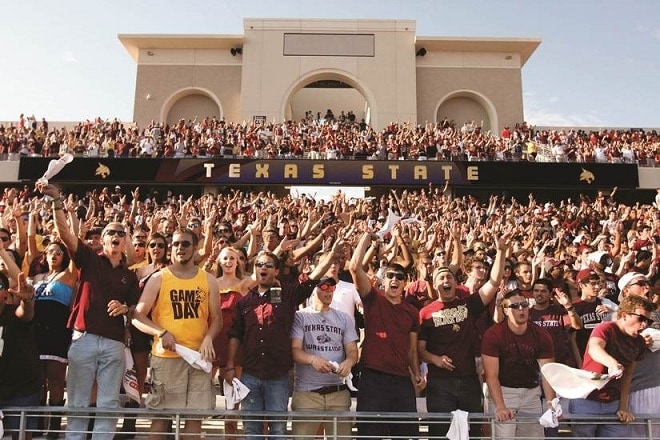 TSU’s president is seeking to have many areas of the campus, including Bobcat Stadium, stay gun free. (Photo: TSU via Instagram)

After a series of compromises, a measure to allow licensed concealed handgun permit holders to carry their guns on public college campuses passed the state legislature earlier this year and was signed by Gov. Greg Abbott (R) into law.

As the law allows university presidents to carve out some areas that will remain gun free zones, TSU President Dr. Denise M. Trauth released recommendation for both safe firearms storage guidelines and to map out enduring gun free zones for the campus.

Among the draft recommendations are any premises that provide services to minors, health care and counseling buildings, disciplinary and legal areas, some residences, the Student Center during polling, Bobcat Stadium and other sports fields.

Those buildings which provide services to minor children, specifically the Clinic for Autism Research Evaluation and Support and Child Development Center, as well as any facility where youth may come for summer camps, are listed due to concerns a child may grab at a gun accidentally.

“Children and adults with intellectual disabilities may not know how to behave when they see a gun, and would not likely behave in predictable ways, thus placing them in danger,” read the guidelines.

Health care facilities such as the Counseling Center, Assessment and Counseling Clinic and Student Health Center are requested to remain gun free, as medical professionals working in these areas may, “feel unsafe with a client who could be carrying a weapon.”

While student housing as a whole is not on the list of gun free zones to be maintained, there is a recommendation for a carve out of the President’s House and surrounding areas, the Student Center when used as a polling place, dorms and classes used during summer programs for K-12 youth, and any area used for regents’ meetings.

However, the guidelines go on to detail that such meetings can be held in various areas acknowledging, “There are several locations on campus that such events take place.”

In addition, sporting facilities to include 30,000-seat Bobcat Stadium and 7,200-seat Strahan Coliseum would be off limits to lawful concealed carry as would practice fields.

TSU’s recommendations come amid widespread protests from other public universities systems in the state and threats of lawsuits from those opposed to more guns on campus.

TSU will hold an open forum Thursday from 7-8 p.m., in the Alkek Teaching Theater on the San Marcos campus to discuss the recommendations.