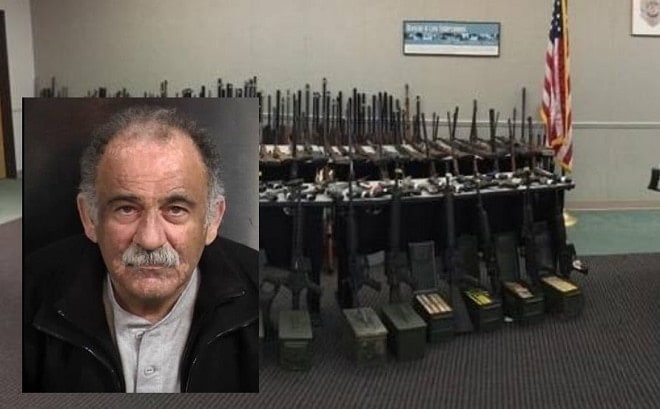 An attorney representing a California FFL holder whose extensive firearm collection was seized in dramatic fashion by authorities is claiming his rights have been violated.

The Clovis area man, Albert Sheakalee, 59, went through mental health treatment last summer, which, unknown to him, landed him in the California Department of Justice’s Armed Prohibited Persons System (APPS) database. This, as touted in a press release Wednesday by state Atty. Gen. Kamala Harris, barred him from firearms ownership and triggered a 12-hour raid on his home from Bureau of Firearms Special Agents on Nov. 12, which ended in his arrest for possessing illegal firearms.

The thing is, argues Sheakalee’s attorney Mark Coleman, is that the weapons are legal and the state violated not only his Second Amendment rights to possess them, but also as he wasn’t aware he had been placed in the database, was denied his right to due process to clear up any misunderstanding before the raid.

“He has never been adjudicated as any sort of threat to anyone,” Coleman told the Fresno Bee. “And despite his desire to find help, Sheakalee found himself on a government list which the Department of Justice claim denies him the right to own firearms.”

Sheakalee, who has a clean criminal record, owns a retirement home and is the retired budget director of Fresno Community Hospital, has maintained a federal firearms license for over two decades for the purpose of buying, selling, and collecting firearms. Seized by authorities last week were 209 handguns, 88 shotguns, 234 rifles, 181 standard capacity magazines, 10 high capacity magazines, 100,521 rounds of various ammunition, and 10 firearms classified by the DOJ as “assault weapons” including a .50 caliber bolt action rifle.

Coleman said the 10 assault weapons, displayed prominently at the front of the impounded collection in a press conference this week, were all legally registered as required by the DOJ.

“Removing firearms from dangerous and violent individuals who pose a threat to themselves and the public is a top priority for the California Department of Justice,” said Harris in a statement. “I thank our Bureau of Firearms Special Agents for their bravery in carrying out these dangerous investigations and their commitment to keeping our communities safe.”

While Harris’s office did not release Sheakalee’s personal information, his mugshot and arrest record were made public knowledge by the Fresno County Sheriff’s Office. This personal tie-in with the case, which has made news not only elsewhere in California and across the country but as far away as Australia has not only embarrassed Sheakalee, maintains Coleman, but also made the Iranian Christian who fled persecution under the Ayatollah the target of threats.

Although DOJ officials claim Sheakalee’s FFL was revoked last year and repeated that assertion to media, Guns.com performed a quick search of the Bureau of Alcohol, Tobacco, Firearms and Explosive’s online public database and found Albert Sheakaleee listed with a Type 1 license (line # 1683 ) on the most current FFL list for the state, dated this August.

Meanwhile, gun control organizations such as the Violence Policy Center have disseminated the story of the gun seizure for their own agenda.

Sheakaleee is free on an $11,000 bond and has not currently been charged.