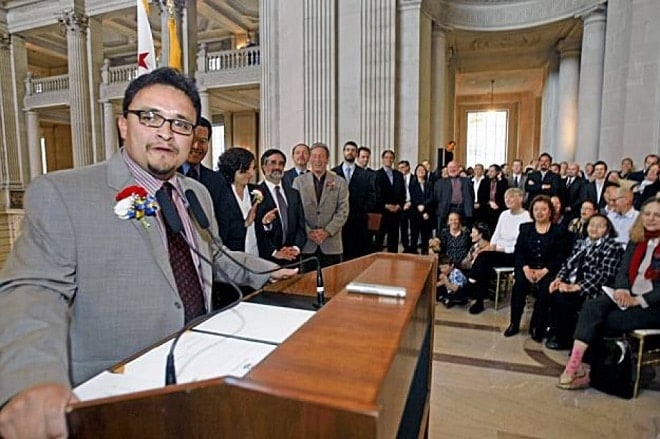 If you leave a gun in a car in the city, Supervisor David Campos wants it locked up. (Photo: Lance Iversen/The San Francisco Chronicle)

San Francisco is weighing a new ordinance that would require anyone in the city, including police, who leave a gun in a vehicle to secure it first.

The measure is an update to a package of public safety proposals introduced in September by Supervisor David Campos designed to address shortcomings exposed in the aftermath of the fatal shooting of Kathryn Steinle on San Francisco’s Pier 14 in July.

Originally designed to apply to law enforcement only, Campos has now expanded his proposal, delivered to the Public Safety Committee on Thursday, to all gun owners.

“Each stolen gun is capable of unleashing unspeakable suffering and pain in our communities,”Campos said Thursday. “Securely locking up dangerous weapons is simply common sense.”

The measure, File 150973, would specifically prohibit San Francisco city peace officers from leaving an issued firearm in a personal vehicle. The only exception would be if the gun was secured in a locked container or locked truck separate from the main cabin of the vehicle.

Added to this is proposed language would be a mandate for private gun owners to follow suit as well under threat of a misdemeanor with a penalty of up to six months in jail and a $10,000 fine.

If approved, it would be the first such law in the state governing how guns are secured in personal vehicles.

“Hopefully once we pass this piece of legislation in San Francisco, the rest of the state can follow suit,” Campos said.

Police Chief Greg Suhr supports Campos’ legislation, and last month issued guidance to his agency that no city-owned firearm was to be left unattended in a vehicle overnight following a report from the local NBC affiliate that a staggering 500 weapons have gone missing various departments to include the California Highway Patrol, the federal Drug Enforcement Administration and six local agencies since 2010. These included Suhr’s own department, which has lost 10 firearms stolen from the vehicles and homes of officers during that period.

The measure is expected to go to a full vote of the board in December and, advises Campos’s office, pass unanimously.