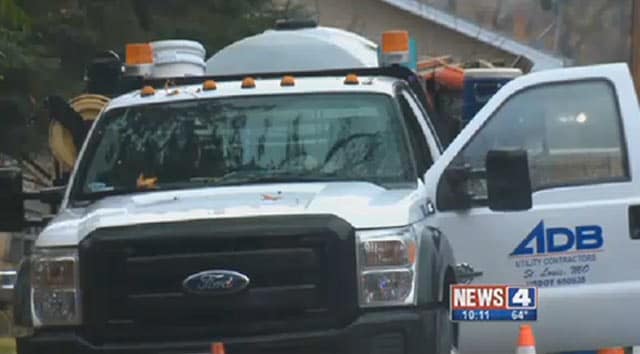 The workers were simply doing their job when they were approached by a 17-year-old with a gun. (Photo: KMOV)

An attempted robbery in an unincorporated area of St. Louis County Monday morning didn’t quite turn out as expected when the suspect discovered one of the intended victims had a handgun.

According to reports from the St. Louis Post-Dispatch, three contractors for ADB Utility Company were working on water lines around 9 a.m. when they were approached by a man with a gun. The suspect demanded two of the workers – ages 49 and 58 – to hand over their wallets and they complied.

The suspect then turned to the third worker, who was near a utility truck, and told him to hand over the valuables from inside the truck. But what the suspect didn’t know at the time was that the worker had a handgun sitting in the truck. The 22-year-old utility worker grabbed the gun and, fearing for his safety since the suspect was armed, shot the suspect a single time in the chest. None of the workers sustained any injuries during the robbery.

The suspect, who was identified the next day as 17-year-old Antonio Moore, was pronounced dead at the scene, where officers also recovered his handgun.

The case remains under investigation, and once the evidence is all collected and the case completed, it will be turned over to the St. Louis County Prosecuting Attorney’s Office to determine whether charges are appropriate. However, St. Louis County Sgt. Brian Schellman, who confirmed the 22-year-old armed citizen is cooperating with authorities, said the St. Louis County Police Department’s Bureau of Crimes Against Persons is currently investigating the shooting as an act of self-defense and charges are not likely.

ADB Utility Company said in a statement that counseling is being offered to the contractors involved in the incident, and the company is cooperating fully with the investigation.