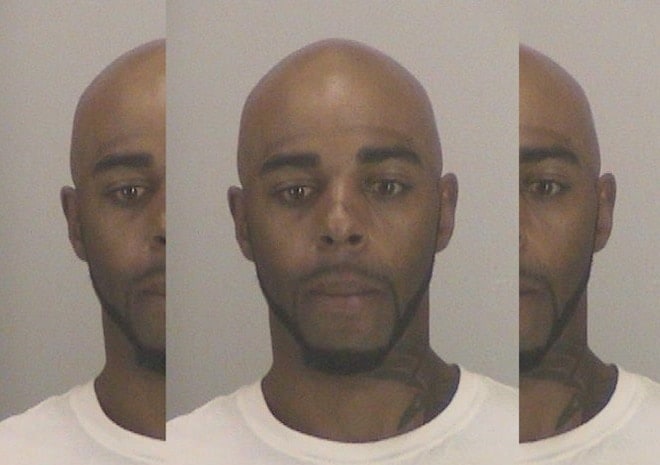 In custody is James Morales, shown in this mugshot from a 2013 arrest for assault; however, authorities are quiet on where the guns are. (Photo: Somerville Police Department)

Authorities this week arrested a recently discharged Army Reserve soldier with a criminal history in connection with the theft of 16 guns from his former armory in Worcester.

James Walker Morales, 34, was arrested in Waterbury, New York on Wednesday by the FBI. According to court documents he was tied to the theft by a combination of DNA evidence gathered at the scene, surveillance footage of the suspect and his car, and the fact that Morales, currently on charges of child rape, was wearing a court-ordered monitoring bracelet that, via GPS, placed him directly inside the facility during the burglary.

Morales had visited the Stoddard center two days prior to the theft during business hours to obtain copies of his discharge papers.  He had enlisted in the reserve in September 2008 and, after service with the 455th Medical Company at Fort Devens until April 2010, had been a member of the 405th Combat Support Hospital in Worcester until June 2013, when he was administratively discharged from the Army, WCVB-TV reports.

An affidavit filed Wednesday by the FBI and signed by U.S. Magistrate Judge David Hennessy states Morales had a prior 2013 conviction for aggravated assault and battery for which he was given a one-year suspended sentence and in May 2015 was released by a local court on charges of child rape and indecent assault on a child under 14 on the condition he wear a monitoring bracelet. That bracelet placed Morales at the scene of the Army Reserve center break in, arriving at 6:40 p.m. on Nov. 14 and leaving at 12:08 a.m. on the 15th, including several pings from within the facility itself.

It’s alleged that Morales gained entry to the building by breaking in a window in the kitchen near the drill room, then climbed to the top of the weapons vault and where he cut through the ceiling using a power saw and pry bar. During which  he apparently hurt himself as droplets of blood, confirmed by DNA tests to be his, were found at the scene.

While the affidavit states an alarm was triggered inside the armory on the night of the 14th, it was not until 7:30 a.m. on the 15th that Army personnel discovered the burglary and alerted authorities.

Officials are mum on how many weapons, if any, were recovered following Morales’s arrest. As reported by Masslive.com, the FBI in Boston is referring all questions to the U.S. Attorney’s Office who has refused to comment.

The M11 pistols, a military variant of the Sig P228, are semi-automatic, while the M4 rifles that are missing are capable of three-round burst fire and, as noted by the FBI, are classified as machine guns under federal law due to their ability to fire more than one round with each trigger pull.