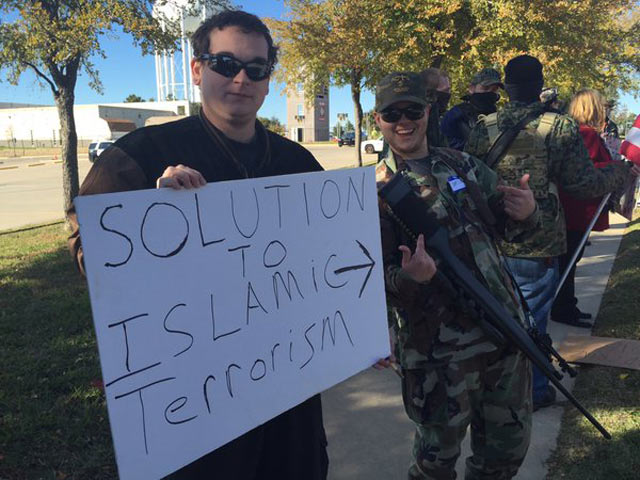 At least one demonstrator has a solution for Islamic terrorism. (Photo: Fox 4)

A group of demonstrators – many armed with long guns – took to the streets outside of an Irving, Texas, mosque Saturday to protest what they referred to as the “Islamization of America.”

About a dozen people showed up for the protest, with several holding signs and flags, while some were dressed in camouflage and others opted to keep their faces covered. David Wright, the event’s organizer and spokesman for the Bureau of American Islamic Relations, told The Dallas Morning News that they attempted to contact the mosque before the demonstration, but received no response to their messages.

Wright explained the protest was planned following the terrorist attacks in Paris. Wright, who was carrying a 12-gauge shotgun at the event, said the group – fearing that a similar attack could occur here – does not support the U.S. allowing Syrian refugees to come into the country.

“I think the popular belief is people are scared,” Wright said. “They’re scared to say anything about it. They’re scared to come out to a place like this and stand in front of a mosque and protest Islam.”

One protester, who did not wish to be identified, likened the situation to “a boiling pot” that “is going to blow.” The anonymous protester also explained to a local Fox affiliate that although he may appear to be racist to some, that’s not at all the case. He said he simply doesn’t want the Islamic beliefs pushed down his throat. 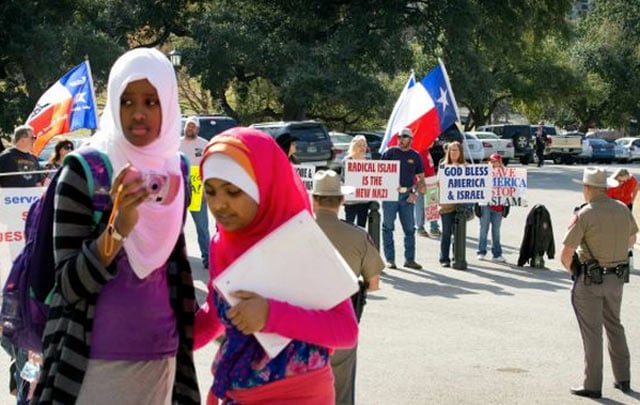 A school girl appears annoyed by the protesters, while her friend seems to be swaying her to just get out of there. (Photo: Fox 4)

Local law enforcement, who also apparently feared tensions may blow, warned the mosque of the anti-Islam rally beforehand. Numerous officers were present during the event to keep an eye on things, with the SWAT team on standby just in case. Authorities asked those coming to the mosque, which included school-aged children, to simply steer clear of the protesters, which they did, with the two parties never coming within more than about 100 feet from one another.

Wright explained they’re toting guns mainly for self-defense and protection, “But I’m not going to lie,” he elaborated, “We do want to show force. … It would be ridiculous to protest Islam without defending ourselves.”

But City Council member David Palmer believes the guns were a little much for a protest and noted that nobody in the mosque appeared to be threatening.

“My initial impression was they were using them for intimidation,” Palmer said, referring to the firearms carried by the protesters. “I doubt that they’d be happy if some of the Muslim churchgoers here showed up at their Christian church, their Baptist church, their Methodist church tomorrow morning with rifles slung over their shoulders.”