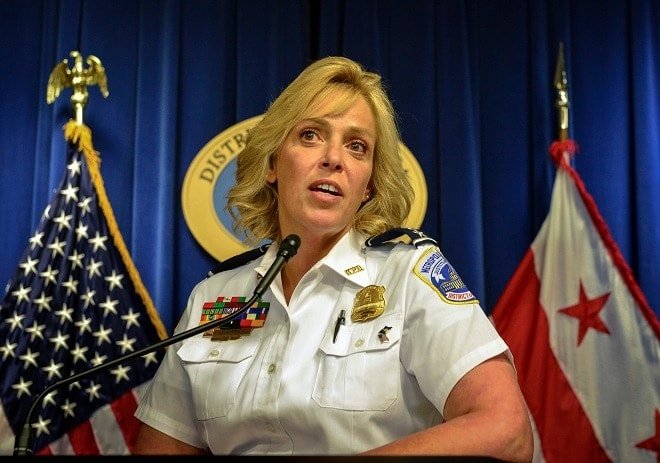 Chief Cathy Lanier thinks Washington D.C. citizens should be prepared to make a stand against gunmen, as long as it’s not with their own legally carried guns. (Photo: Bill O’Leary/The Washington Post)

Responsible under the District’s notoriously strict and court-mandated concealed handgun licensing scheme to issue permits, Lanier has granted so few that gun rights advocates have taken the city back to federal court in recent months.

Nevertheless, on CBS’s 60 Minutes on Sunday, when interviewed by Anderson Cooper on what the proper response by civilians to a situation where gunmen or terrorists are actively shooting people, she advocated taking action if possible.

“Your options are run, hide, or fight,” said Lanier. “If you’re in a position to try and take the gunman down, to take the gunman out, it’s the best option for saving lives before police can get there,” she told Cooper.

The city banned concealed carry for 83 years and stuck to its guns until a lengthy court battle decided last September by U.S. District Judge Frederick Scullin in the case of Palmer v D.C., whose victory struck down the city’s prohibition. Since then, Washington has fought the case through appeal, even going so far last week as to argue that Scullin, who was assigned the Palmer case which he decided from his bench in Syracuse, New York, in an effort to wade through a backlog of cases in the D.C. court, exceeded his mandate by hearing follow-on challenges over how Lanier issued permits.

Among the hoops would-be permit holders have to jump through in the city is to show “good cause,” citing special dangers such as current documented and specific threats other than a simple desire for self-defense.

As the city has granted 40 permits as of June, at the same time that the District’s homicide rate is up over 60 percent from last year, many otherwise law abiding citizens are carrying concealed guns illegally out of a greater desire for self-defense despite the consequences.

“There’s no way to quantify that. I mean because they could have bought that gun, legally somewhere else, and moved to D.C. and not registered it here in the District,” Delroy Burton, Chairman of the DC Police Union, told WUSA9 to the question of just how many are illegally carrying. “They may carry it around, they run the risk of, at some point, coming in contact with law enforcement and the gun is not properly registered and they have to deal with that at a later date. But that is a strong possibility. That there are a lot of people who are law abiding for the vast majority of their lives and feel the need to protect themselves to carry a weapon illegally.”

Second Amendment advocates who have been slogging away in the courts to bring concealed carry to the District told Guns.com that Lanier’s recent remarks ring hollow.

“Millions of honest Americans are licensed to carry all over the country,” said Citizens Committee for the Right to Keep and Bear Arms Chairman Alan Gottlieb in an email. “But in the District of Columbia, they’ve written laws to discourage citizens from exercising their Second Amendment right to keep and especially bear arms. That prevents people from defending themselves and their families outside of the home, which is where such an attack would happen.

“We’re glad Chief Lanier departed from the usual narrative and encouraged people to fight back,” Gottlieb added, “but her advice would have more credibility if she were to take a leadership role in reforming the District’s gun laws. You can’t fight back if you don’t have the tools, and the only way to take a gunman out, as the chief suggested, is to shoot back. That’s pretty hard if you don’t have a gun.”