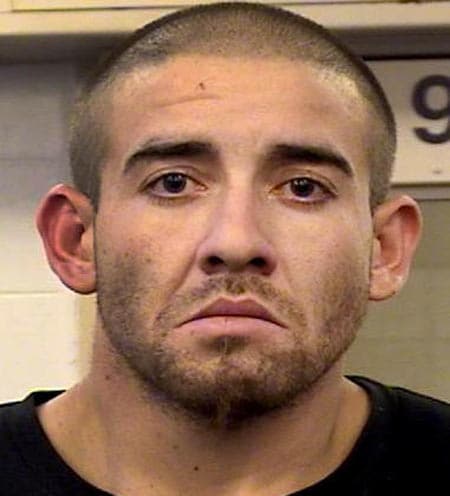 Aaron Lujan made three trips to jail in one week and was released each time. (Photo: Metropolitan Detention Center)

A 26-year-old man landed back in jail for the third time in a week when an Albuquerque couple held him at gunpoint after they caught him stealing from their garage Thursday.

George Kennedy, 70, went into his garage and immediately noticed a man outside loading items into a sport utility vehicle, the Albuquerque Journal reported. Among those items were things that belonged to Kennedy, including a generator, power tools and a large cooler.

Kennedy confronted the suspect, who was later identified as Aaron Lujan, 26, but Lujan – seemingly without a care in the world – simply ignored the homeowner and went about loading the stolen items into his vehicle.

Kennedy then went back inside, called the police and retrieved a shotgun, while his wife, Rebecca, 66, grabbed her handgun. The couple walked back outside and – while both aiming their own guns at him – told Lujan to drop their belongings and put his hands up.

Lujan then complied to the homeowner’s commands and no one was injured.

Albuquerque police spokesman Tanner Tixier said when the responding officer arrived on the scene, they found Lujan on his knees, with George and Rebecca both holding him at gunpoint. Lujan was apprehended in less than a minute with no further incident. The officer also found Rebbeca’s keys in Lujan’s pocket and discovered that the vehicle he was driving was stolen from a nearby home.

While being detained, Lujan admitted to authorities he was taking items from the Kennedy’s garage and putting them in the vehicle he was driving. Lujan was subsequently arrested and charged with residential burglary, and released the following day.

But it wasn’t Lujan’s first stint in jail either, according to reports from the Eagle-Tribune. He was released from jail that same week after being held on drug charges from a July incident, but while out on bond was arrested again after robbing an elderly woman.

Apparently after robbing her, Lujan contacted the victim in an attempt to return her keys. It’s unknown if Lujan admitted to her that he was the one who robbed her or acted as if he simply found the keys and was trying to return them. The two arranged a time and location to meet, but instead of going to get her keys, the woman called the police. Officers showed up at the meeting place and following a brief pursuit, arrested Lujan, whose charges included assault with a deadly weapon.