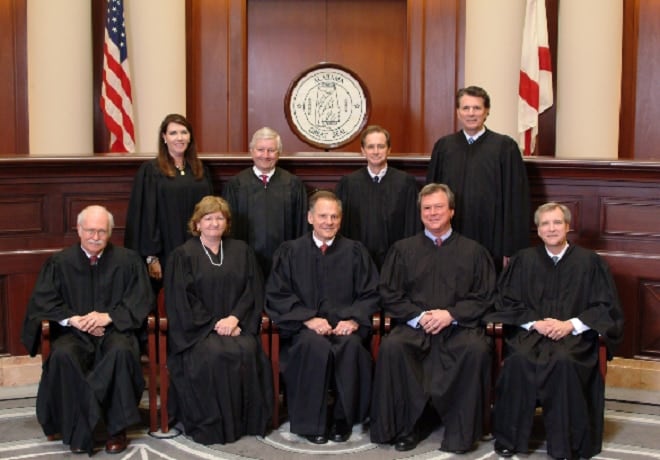 The Alabama Supreme Court last week decided not to rehear a case dealing with open carry that it decided in favor of a gun rights advocate earlier this summer. (Photo: AL Courts)

The Alabama Supreme Court is sticking by its guns in a September decision where it found a law banning the open carry of a gun onto someone else’s property unconstitutional.

The court on Friday rejected a petition to appeal that ruling from the city of Jacksonville, ending the four-year legal battle over open carry restrictions.

The case involved that of Jason Dean Tulley, arrested in 2011 for carrying a pistol on premises not his own after he visited the First Educators Credit Union while open carrying. Although Tulley removed the gun from the property when told by a local police officer who was moonlighting as a security guard that the firearm was not allowed, he was charged with a crime days later.

Found guilty in a municipal court and ordered to pay $250 in fines and court costs, Tulley appealed to a county circuit court, which not only upheld the city judge’s verdict but also tacked on a 30-day jail term and six months probation on top of it.

That prompted Tulley to continue his appeal to the state supreme court who found in a 5-3 decision this summer that the city’s original enforcement against the open carry advocate was “unconstitutional on its face in that it cannot be enforced under any circumstances,” as it chose to use an outdated ordinance that was something of a catch-all and went past state law.

Now, with the court rejecting the city’s petition for a rehearing, it seems Tulley came out on top.

“After years of battling the City of Jacksonville Jason Tulley has finally reached the end of his journey,” said Bama Carry, a state open carry group of which Tulley is a founder, in a statement Monday. “The Alabama Supreme Court had already ruled in Mr. Tulley’s favor once but the City of Jacksonville after suffering one black eye was determined to suffer another … so the Court obliged.”

Jacksonville prosecutor Marilyn May Hudson feels the justices have gone too far in their decision.

“The city ordinance included provisions for definition and punishments for any statute in that Alabama Code that lacked such,” Hudson told AL.com. “The Supreme Court’s ruling in this case overrules the lawful City Ordinance and effectively places the burden and blame for poorly written laws on the towns and counties, rather than on the Legislators in Montgomery who wrote these laws.”

Tulley’s legal team says the case, which is now kicked back to the Calhoun County Circuit Court with a dismissal ruling from the state’s highest court, should be at an end.

“Everything should be over,” said attorney J.D. Lloyd. “I’m not sure what the City’s going to try to do, but Jason should be done for good with this case. There’s really nothing else that they can do.”